Time to start catching up on the mailbag with the box breaks out of the way. First up, some group break stuff from the local teams I cheer on, specifically the Toronto ones. The Raptors go tomorrow, and the Blue Jays from a mixer go today. There were 6 boxes in it, and only 2017 Tier One failed to land me a card. I'll attack these chronologically. 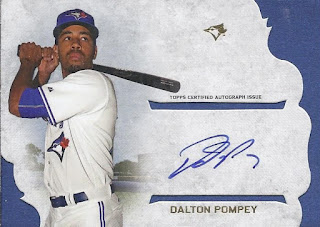 The wayback machine goes to 2015 for the first card, and an on-card autograph from Dalton Pompey. His 2017 has not been good. He got injured during the WBC, and has spent the season on the 60-day DL. Rehabbing in AAA did not go well, so I'll just assume he won't see action until 2018.

Fast forward one year to 2016, and some Bowman's Best. There's the start of the great expansion to my Josh Donaldson collection, with a base and a refractor to go alongside another shiny card with the Alford. 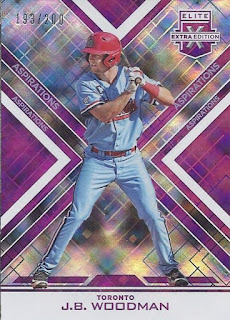 Just one card from 2016 Elite Extra Edition, but this appearance of the 2016 2nd round pick out of Ole Miss squashes the Bowman's Best in terms of loudness. If you want accuracy, this is an Aspirations Purple parallel. 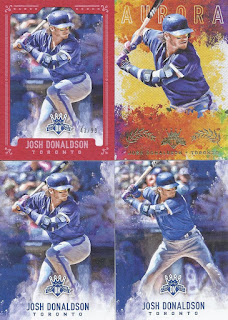 Here's your final Donaldson of the break, here with a Sapphire Blue parallel /150. And another hit, with what looks like a piece of the logo on this thick patch card from Devon Travis. Much like the other hit, he's also a member of the 60-day DL, although he has seen some action this season.

And there you go. Excalibur Raptors tomorrow!
Posted by buckstorecards at 06:32