Time to wrap this flea market trip up with my fave pick up from trips there, the $5 brick of cards. These are a brick of about 50 or so base cards, mostly from recent low/mid-range sets, with a hit in the middle. This might be one of the better ones I've gotten for nothing more than the variety - over 20 different sets among the 50+ cards.

I'm in the mood to scan everything. So here we go in groups of 9. 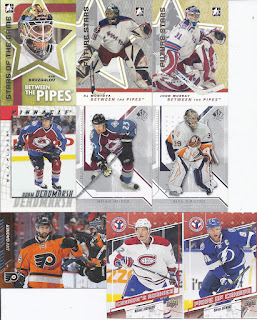 That's a great start. The Ilya was a visible card, so I got it for the mask binder content. After that, there's an Al Montoya from his Hartford Wolfpack days for Dennis @ TMM, and a Kitchener Rangers cards for that binder. The Deadmarsh was the oldest card in the repack. Unfortunately, that Hejduk was a 2/14 binder dupe, and so was the Dipietro in the mask binder. And this ends on some Hockey Card Day cards from this past year. 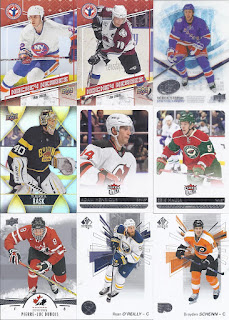 More HCD stuff, and my first card from this year's Ice release. The Tim Horton's card not only offers mask binder goodness, but also the throwback jerseys. I'll miss seeing those on the ice in 17-18. Pierre-Luc Dubois was the 3rd overall pick in 2016 to Columbus, so that's a pretty good prospect to add. 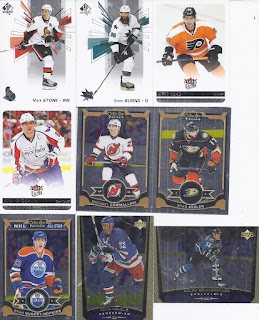 The third grouping starts with the first Senators card of the repack. These repacks always seem to contain one of either Gretzky, Crosby or Ovechkin, and there's this repack's version of that. There's the second TMM card from this, followed closely by the third as some more 90s content appears with some Gold Reserves. 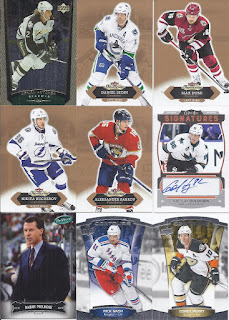 Gold Reserve wraps up as the 4th part starts, and it leads into the "too much gold" look from this year's Fleer Showcase, although I do like the 20th Anniversary patch on the Domi. But, that does lead into the hit of the package. Technically, this is from the Update portion of Series 2 Upper Deck as opposed to plain old OPC, but I don't have too many of these in any case. Goldobin is now in Vancouver. That might not even be my favourite card in the bunch, with the Barry Melrose right after it. 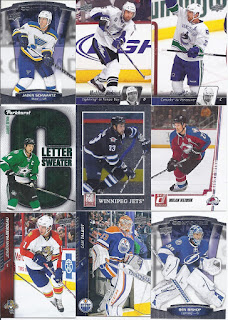 The Schwartz was with me to start the 5th part. Those two French cards were both needs for my 1-200 set build of that. So, WOO-HOO for that! Then there's an insert from this year's Parkhurst and my second Milan Hejduk card of the break. As well as my second dupe of Hejduk. I'll certainly be adding that Bishop to the mask binder. That Talbot is already there. 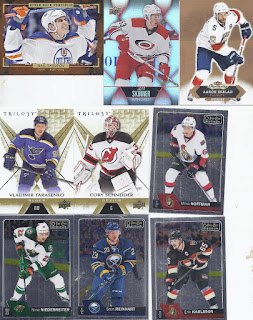 And it ends with a Sens card, a Rangers alum, and the Hoffman which could end up in either of the two.