Over to the mailbag today, and a bubbler that showed up from Dennis @ Too Many Manninghams. 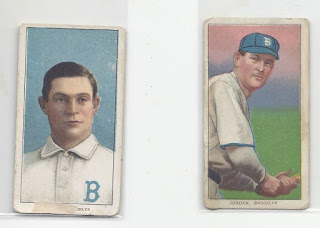 We're starting with the most vintage card I've ever acquired. I had some reprints of these Tim Jordans in my collection, but these are two actual T206s. The back of the portrait card actually looks really nice, to make up for the small paper loss at the front. The batting shot was definitely pasted in some sort of location at one point. I think this was the first time I knocked a card off my not-so-reasonable wantlist as well. 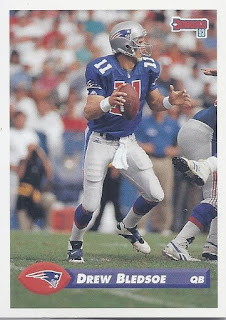 Speaking of that, here's one off my reasonable wantlist. This insert set is sort of a precursor to Archives/Heritage, with Donruss taking established players, and putting them in baseball designs from their rookie season. 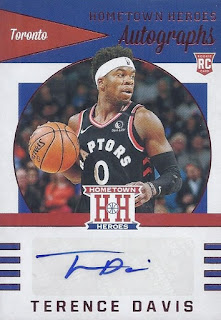 If the T206s weren't the big cards from this little mailer, this might have been. Since Davis was undrafted, he went through most of the releases this year being ignored by Panini. Finally, starting with Mosaic, he finally started making regular appearances in products. But because of his lack of cards, his rookie autographs as a Raptor were kinda big. While I already had his NCAA Contenders card, this is my first hit of his as a Raptor. 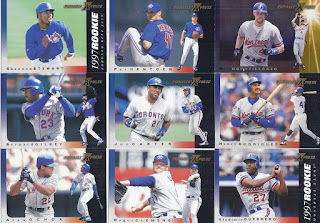 I'm bouncing all over the place with this, so it is time to show off the volume. The most cards in the mailer were from 1997 Pinnacle X-Press. 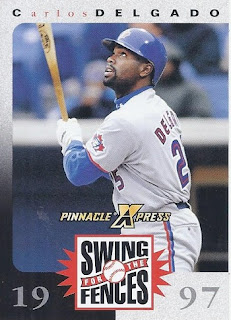 Including one new Delgado, a collection that really hasn't grown too much in 2020. 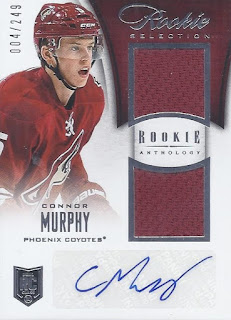 As I said - all over the place. Here's one of the cards I needed to wrap up the base set for 13-14 Rookie Anthology. Not counting unfulfilled redemptions, 2 cards on their way from COMC will put the final touches on the set.

3 new Bills! The Jim Kelly is a 2/14 binder dupe, but this will make a nice home in the Bills binders. 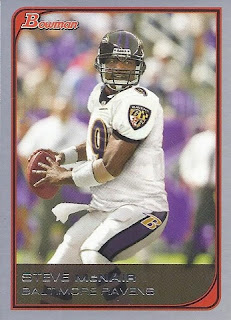 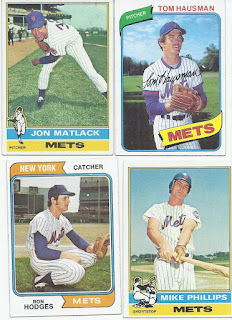 While not nearly as vintage as the Tim Jordans, here's some vintage-y Mets content. 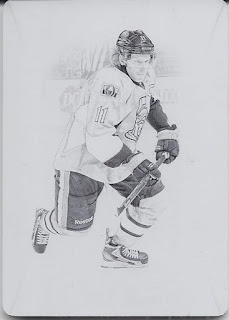 Let's end with some 1/1 plates! Excepting this Alfie out of Dominion, they were all 2/14 babies. 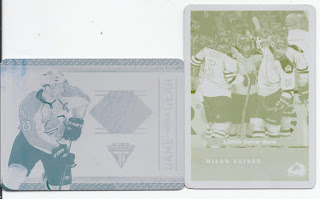 Some of the plates actually were used to produce some interesting photos. That Score Hejduk is from the 2013 set, and the card commemorates Hejduk's 1000th game. 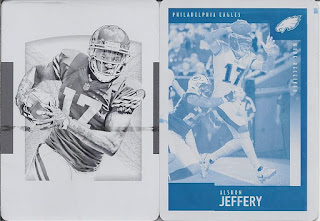 Back-to-back Score plates! There's a lot of great shots in this year's Score release, and Alshon got one of them as he walks the tightrope on a reception. 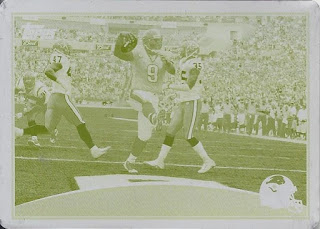 But photographically, my favourite goes to David Garrard, high-stepping into the end zone for 6 out of 2009 Topps. 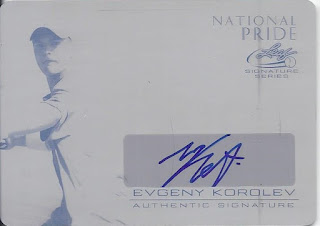 This mish-mash of a post that went all over the place comes to an end with a new face for the 2/14 collection. And what better way to welcome Evgeny Korolev to the collection than with both an autograph and a 1/1 plate. I'd say that would probably the first time that happened in building the collection, but as I approach 2900 cards in the collection, I can't say anything for sure beyond the basic numbers.
And there you have it! I'll be firing something back in your direction when my next COMC envelope shows up. Probably in November-ish.
Posted by buckstorecards at 06:00