I hinted the remainder of my 20-21 Artifacts content would come from group breaks here and there,  and here are a couple. These were randoms, and this time the randomizer landed on Tampa and Vegas. 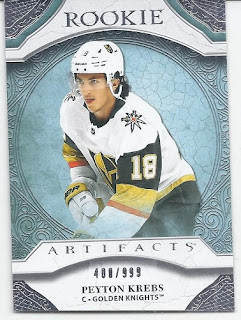 It might not be his Young Guns card, but this is a pretty solid rookie to land from the spot. 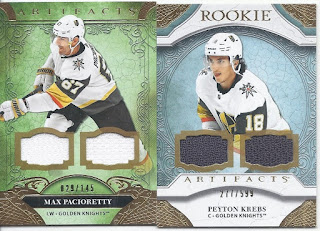 And if you want some relic content from this portion, here's a quartet of swatches on a pair of cards. That Pacioretty is already put aside for yet another Ann Arbor bound mailer.
With the number of breaks the locals do, it really isn't feasible for them to hang on to the unnamed redemptions until after Upper Deck names them. So, they're randomed through all the teams in the break. The Vegas slot also landed this card: 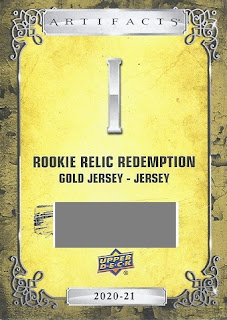 The names for this were recently announced, and it guess this will be my first Tim Stutzle card, even if it doesn't end up as the first one in my collection. 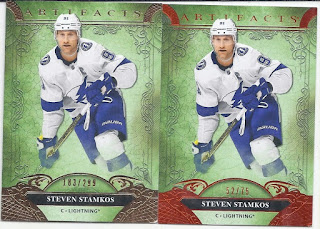 Tampa got me a couple base parallels. The /299 is the copper parallel, while the /75 is a seasonal autumn parallel. 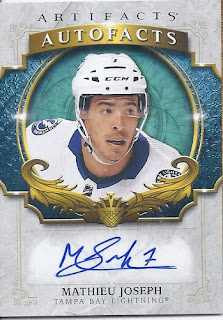 The Autofacts insert set can get very sticker-dumpy at times, as sometimes the players in this set are already out of the league by the time this set drops early in the season. But Mathieu Joseph is still around with Tampa, and probably deserves a base card featuring him during warm-ups, if for nothing else than to get the best 'fro on a NHL hockey card since Larry Giroux. 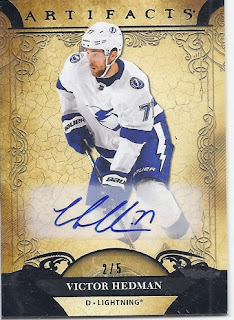 But there's no sticker-dump thinking with this. Although being a defenseman probably hurts resale value, I don't really plan to let go of this sweet auto. Hedman is a several-time All-Star, and has a Norris Trophy to his name. He added a Conn Smythe trophy to his collection off Tampa's Stanley Cup victory last season. That makes this a pretty good time to land this likely keeper.
And there you have it!
Posted by buckstorecards at 10:59