Since my primary outings the past month have been trips to the Shoppers Drug Mart, (conveniently where the post office is as well), I might as well pick up a pack o' cards while there. 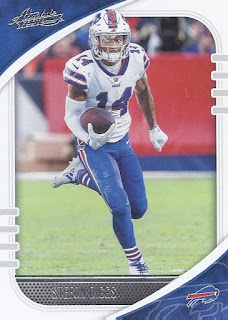 And in a little bit of perfection, the first card out is a Bills card! I'm assuming this is a photoshop special, as I think this set's early October release would have been too soon to get a new photo issued in time. But I've been wrong about these before. Either way, here's the only Bills content in this pack. 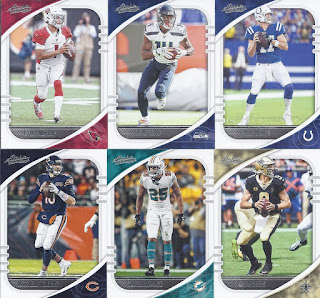 Pretty much what I expected from the veteran base cards. With each team warranting about 3 veteran base cards in the 100-card portion of the base set, I'd expect each one to have at least one of them be a QB, and to maybe have a slight over representation in a single pack.

There were 3 green parallels in the pack. For some reason, the rookie portion of both this and the base set are foil. And even it isn't the one I collect, I did land a Josh Allen in this. 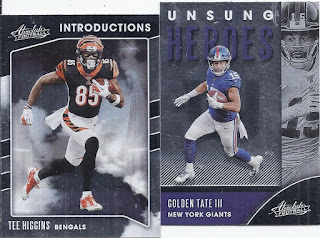 A couple inserts - also with the foil. I must admit I'd expect an insert set named Unsung Heroes to be devoted to people without a lot of cards out there. A lineman. An undrafted WR who has hung around for a few seasons. Sadly, the checklist has a lot of names with a lot of cards. It looks like the entire checklist has at least 50 options of cards for them on COMC. 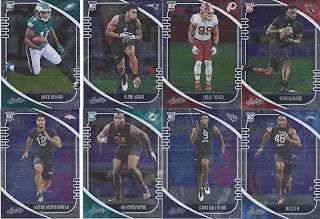 More rookies than veterans in a Panini release? What type of wizardry is this? It looks like Chase Young is the big name in this group.
There you have it!