2021 Adventures in Repacks Part 9 - Football from the Source

Let's do another one of these. 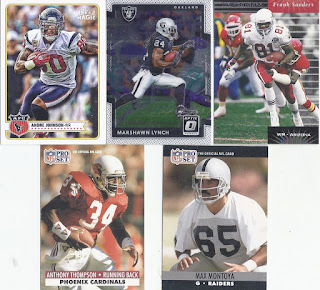 The Optic continues below the opening card with an appearance of Beast Mode. That's definitely an interesting design on the 1999 Donruss base card, and the contrasting black & white/colour background to the photo looked better on me the more I looked at it. Panini revisited it in 2019 for a Retro insert series in Donruss. At the bottom, there's the expected Pro Set. 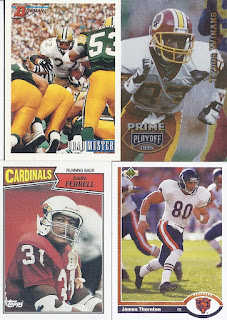 That's a really nice photo on the Bowman with Muster seeming to face impossible odds as he drives for short yardage. Another photo, likely taken a fraction of a second later, was used on Muster's Topps card from the same year. 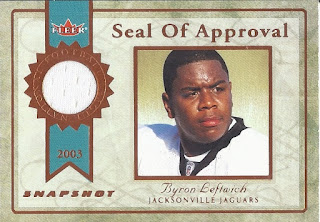 And your hit. It's a rather different design, but still showcases the swatch nicely with a diploma-ish design. Leftwich was the Jaguars QB in the 00's that wasn't born on 2/14. 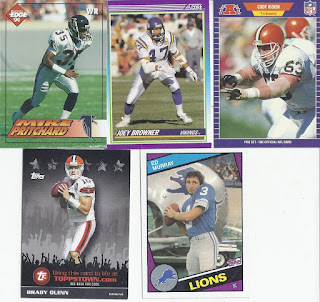 Remember when Brady Quinn was the latest Browns QB of the future? Murray seems to have decent enough form to overtake him. That cart behind him is still the star of that card, despite being one of my favourite rarities of being a kicker card. There's an OL card as well. 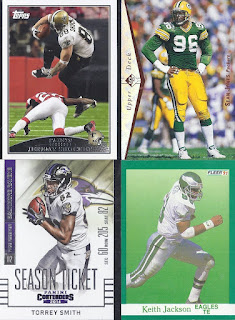 Still yet another photographic element I like on football cards shows up on the Shockey - where the players feet aren't touching the ground in the photo. 2014 was probably one of my least favourite Contenders designs, with the ticket element coming off as an afterthought in the design. 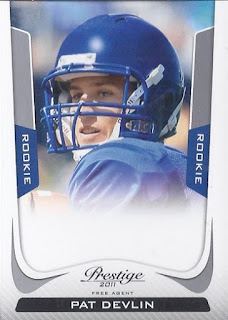 The final card. It just seems like that Panini just used the base autograph design and transferred it over to the base card. It is also a not-that-common appearance of an undrafted player in a mainstream release. Devlin would eventually sign with Miami, but his NFL appearance was limited to the practice squad and clipboard holding.
There you have it!
Posted by buckstorecards at 08:44