Back to the group break mailers, and a pair that showed up that added some new names to the team PC, even if some of them have yet to don Bills attire. 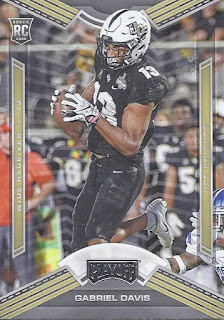 First up is a bunch of stuff from Chronicles Draft, which brings a bunch of designs into a collegiate product. Davis was a 4th rounder out of UCF, and while he only got one card here, he is a Rookie Premiere guy, so there should be more to come. 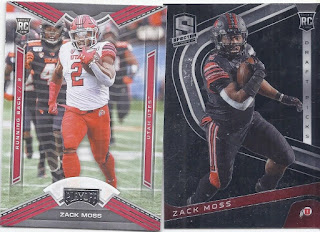 I'm doing the base cards, such as they are, in terms of increasing volume. Here's two from Zack Moss, a third rounder, and another rookie premiere guy who will be providing me with player-worn swatches as the year goes on.

We finally get a look at what the base cards really look like. This is definitely the most newspaper-ish for a Chronicles card so far. 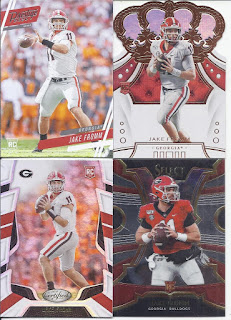 Of course, a QB would lead the way in terms of base/insert/parallel/whatever cards. You'd expect nothing less from such an elite white person. 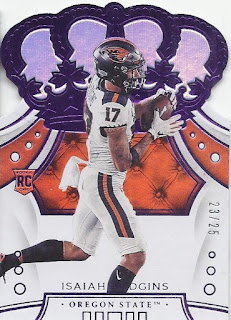 My first numbered card adds a purple parallel to my collection. And yes, all these collegiate cards go right into the Bills binders. Why wouldn't they? 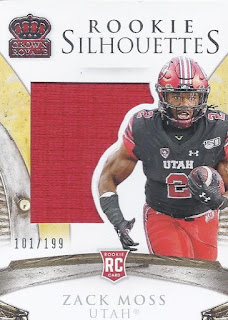 The Silhouettes are always welcome additions to the ol' binder. They might work better with just a plain swatch, and no chance of any portion of a patch hiding behind the player. 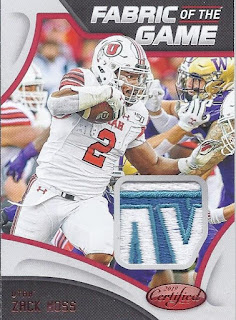 And holy sweetness is that a nice patch to end the Chronicles portion of the mail. The research to discover its source wasn't too hard, as it traces to the 2018 Holiday Bowl. Alas, this has to be player worn as Moss didn't appear in the game due to injuries. 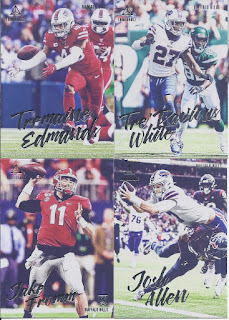 Here's some Luminance, which does have some of my favourite base card designs. And we finally see Bills unifoms, and the draft picks are now listed with their new team. That Tremaine Edmunds comes as close as one can to one of my favourite football themes, a defensive player with the ball. So, I have to vote Josh Allen's stretch, along with Jon Feliciano celebrating in the background. 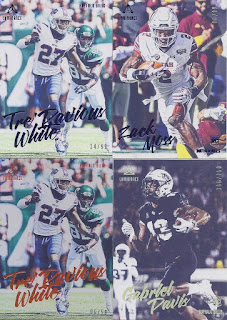 Of course, there's a variety of numbered parallels as well. 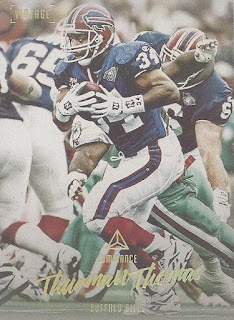 The Legends make an appearance as part of the 'Vintage Performers' subset. I like how the filter gives this card a slightly older appearance than the regular base cards. 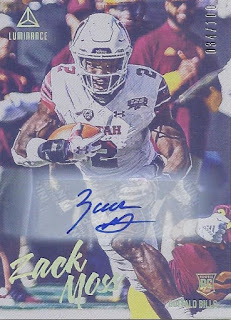 Yes. The Zack Moss portion of my PC got really good after this mailer. Iffy sig, but at least the 'Z' looks nice, which it should for any player with a capital 'Z' in their name.

There you have it!
Posted by buckstorecards at 14:15