Not a box this time, but some group break goodies where I grabbed the Senators and Carolina. 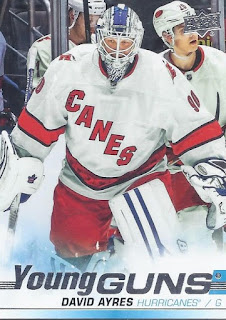 I grabbed Carolina for one purpose - that is chasing the Young Guns card of emergency back-up goaltender David Ayres. It was cheaper to get the Carolina spot in breaks, than to buy the card directly (still is, even with it not going for pre-sale $75-$100 levels) so I went that route, and any extra content that came with it would be a bonus. 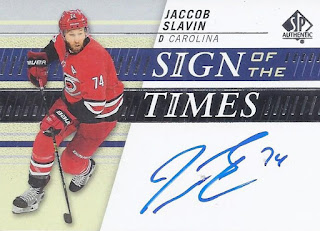 On-card autograph, and one that actually uses the large available space wisely? Bonus! 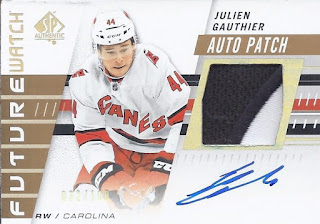 RPA, which are one-per-case in this? Extra bonus! Even if Gauthier hasn't exactly gone crazy in his rookie season (and he's already been traded to the Rangers). 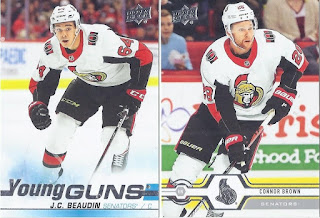 I picked up the Senators spot as well in this, and got the YG of JC Beaudin, as well as Connor Brown's first Sens card. Brown was part of the Cody Ceci trade with the Leafs. 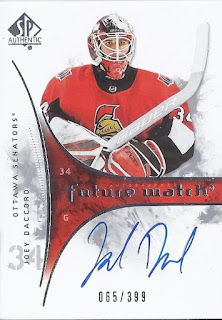 Hey! I got an auto from this spot as well! This is my second auto of their latest #1 goaltender-of-the-future, Joey Daccord.

There you have it! I'll probably open up the mailbag next post.
Posted by buckstorecards at 22:30