In Which I (sorta) Build My Own Repack - Part 1 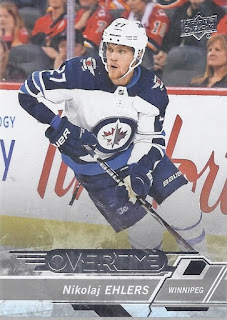 Since my most frequent repack busts through the dollar store as of late were of the 80 card variety. I decided to build my own 80 card repack through sportlots, consisting exclusively of additions to my 2/14 collection. Find a seller with a lot of hockey cards, then don't stop until I reach 80 cards. Simple!

Leading the way in this post is the most recent card in the mailer, out of 18/19 Overtime, and the only Ehlers appearance. 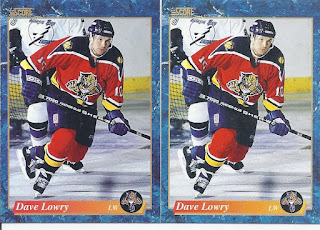 Compare and contrast 1 Ehlers with players like this, who would get more than one appearance with basically the same design. While these two look very similar... 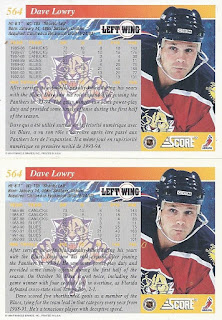 turning them over shows one is the Canadian/bilingual version.

Or, I could go the more common route for recent releases, and just get the base card and a bunch of parallels. It was the strength of these purchases that pushed my Milan Hejduk collection into the 200s, the first player to reach that plateau. 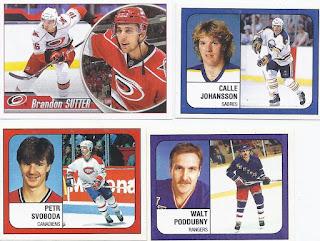 Here's another logical group of cards to bunch together that aren't cards at all. A quartet of stickers from Panini's annual release. The Sutter is out of 10/11, which the others go back to 1988. Since pretty much all of Calle Johansson's releases have him as a member of the Washington Capitals, I'm happy to welcome this one most of all from the group. Despite hair poofiness. 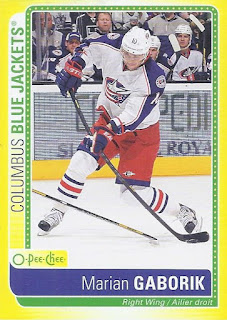 But, you can still have modern stickers, such as this Gaborik insert from 13-14 OPC. 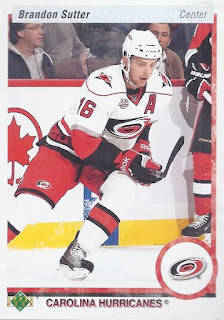 Or a card that is about as thin as a sticker, the unfortunate parallel series from 10-11 UD. 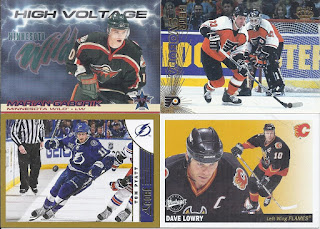 How to end part 1 of this? Why not step away from any more vertical entries with these horizontals? With all the 13-14 Score I've busted, I'm somewhat surprised I didn't pull that Pyatt already. Gaborik is another insert card, and then there are a couple base cards on the right. I'd probably like the Vintage more if both photos didn't feature the flaming-snot logo.

But there you go. More to come!
Posted by buckstorecards at 07:10