Time for some group break stuff from over the US Thanksgiving holidays. I was in some breaks of Panini products and Topps products. I got more content from the former, and since I'm feeling somewhat verbose today, I'll show off these now. 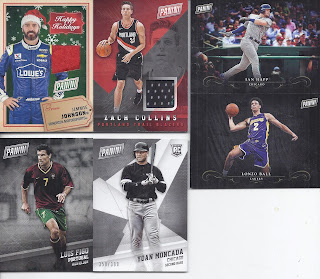 4 different sports spread over 6 cards and 3 packs, including a pair of relics. I'm always happy to add one of those Santa hat relics each year. This year's entry is a little bit fluffier in hand than it appears in the scan. That's a sentence I never thought I'd type. Ever. 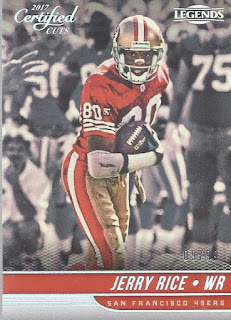 I'll be starting off with some stuff from this year's Certified Cuts release, where the randomizer landed on the 49ers for me. It is really hard to see, but this silver parallel is numbered to 99. The design for the Legends part of the set is really strong, and I really like how the featured player is in colour, while the background is in black and white. 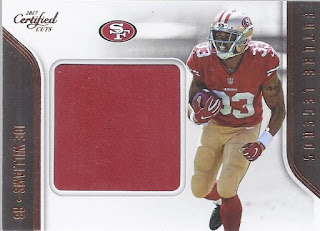 Your standard event worn relic-card. They might be a little early to be proclaim him a future legend. 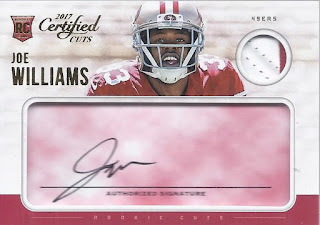 The auto/relics in this are interesting, as they really keep to the 'Cuts' in the name with the autograph looking like it was cut from a cheque - a common look for cut signatures. 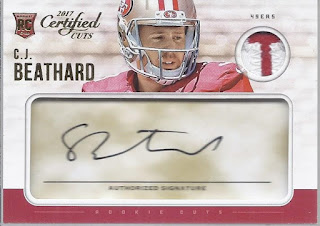 Here's another one. These are actually the base cards, while the Williams is a red parallel /99.

Off to basketball, where I landed Milwaukee in the random of Grand Reserve. 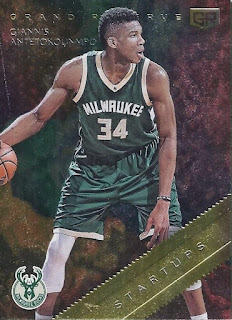 A nice metallic insert starts this off. I actually landed two of these, so I can keep one and throw the other into my "COMC-bound" container. 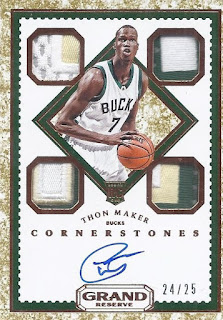 This would be the big card from the Panini breaks. Maker is a really promising talent in the Bucks organization. He went 10th overall in 2016, but might have gone even higher had there not been questions about his age. An on-card autograph and some nice patches highlight this card. With the diamond background, wouldn't this be a great design for a baseball release?

There you go! The far-less-numerous Topps goodies tomorrow!
Posted by buckstorecards at 09:02