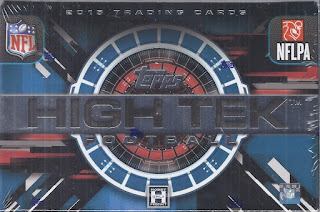 Jumping forward to a 2015 release, and an entirely acetate group of cards. Only 8 cards per box, but one will be an on-card autograph. And pretty much every card in the set is some sort of parallel over various patterns, and there really isn't a base set. 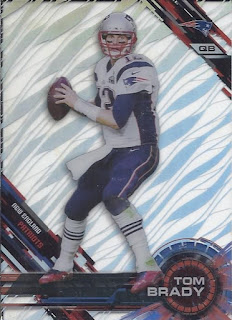 First out of the box is Tom Brady and the grass pattern, and a card destined for the next TMM mailer. 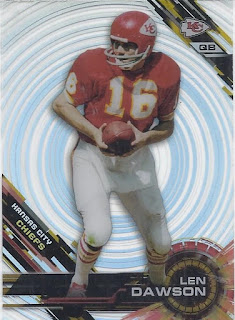 Only 100 cards in the "base" set, with a nice mix of current players, rookies and legends. This fits into that category, with a with an old school photo mixed with current card technology. This is the Spiral pattern. 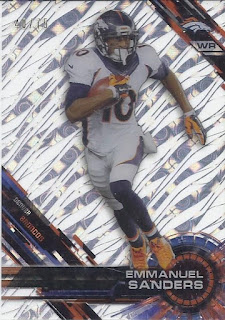 You're promised one parallel (parallel in a set of parallels?) per box, and here's that, with this grass/waves tidal diffractor. 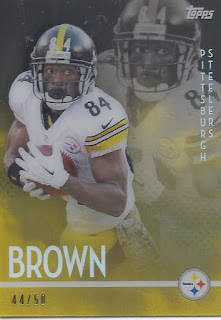 This isn't a guarantee. In fact, these Low Tek Diffractors fall at a rate of 1:50 packs/boxes. The acetate background here looks really bland in hand, but these scan beautifully, much like most of the set. 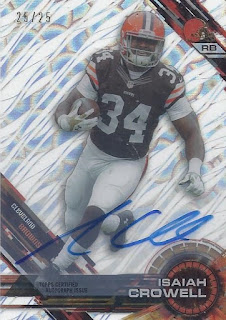 3 numbered cards in one pack/box is definitely a good thing. Crowell is also 25/25, and it joins the 1/249 Brendan Gallagher as my second ebay 1/1 of this Stacks of Wax series. Crowell was undrafted, but seems to be the #1 RB for the Browns now. If I get a hit of a player that's still on the team and not on the practice squad from a product thats a couple years old, I'm happy with the pull. The subset for this is the grass/waves clouds diffractor.

And a trio of rookies end this. Johnson is the Circuit Board parallel, Perriman is the Dots parallel, and Grayson is Waves.

And that's a lot of parallels. Next up, a product released in the past year - 2016-17 Absolute basketball.
Posted by buckstorecards at 07:00