I've decided that I'm going to build the Score 2017 football set for my football set build this season, since I really wasn't too crazy about the Donruss design this year. So, I ordered a hobby box from blowout, and picked up a blaster from Wally World to do a little more damage to what I've already got. All this should put me within striking distance of the base set. The former should arrive tomorrow, so I'll breeze through the highlights of the 11 packs contained within.

First out is a highlight of this pack - a CFL alum with Cameron Wake! Definitely a Dolphins hot pack with another card for that team among the rest - but that is offset by a gold parallel of Tyrod! There is one promised relic per blaster, and here it is. Böhringer was probably the one you didn't want to pull as a guaranteed hit last season, seeing as he was on the practice squad last year. I just had to wait a year for the disappointment. I really do like the photo on the Sprinkle, with the stands in the background filled with fans in the team colours. 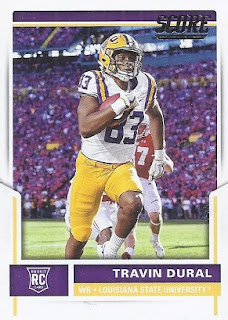 Again, a great shot in the theme of the Sprinkle in pack #2. 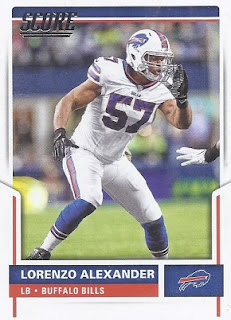 The Bills card here is the unsurprising highlight for me. It is really nice seeing Lorenzo Alexander get some base card love this season after having a great year on the Bills line. 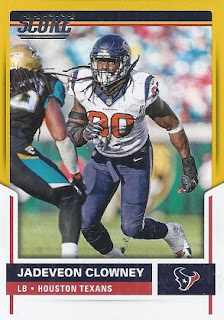 WOO-HOO! While the relic may have been blah, the parallels aren't. First up a Tyrod, and second up is a member of the 2/14 club with Jadeveon Clowney. No compaints about this. 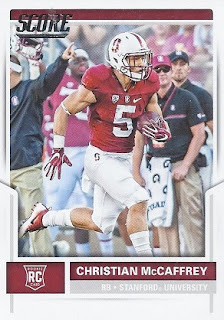 Pretty boring - so here's the highest overall draft pick among this year's rookie class so far in the blaster. #6th overall to the Panthers. 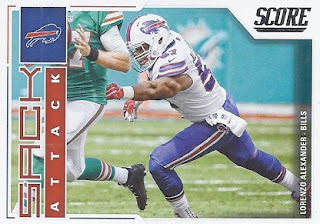 More Bills/Lorenzo Alexander love in this pack, as he also makes an appearance on an insert card in this year's set. 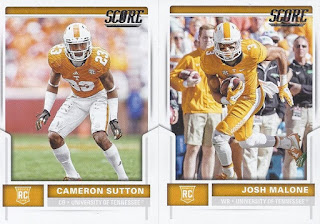 There are three rookies per pack in this, (along with 2 inserts and 7 veteran base) so the most interesting thing in this pack was the collation putting a pair of Volunteers beside each other. Sutton was a 3rd rounder to the Steelers, with Malone being a 4th rounder to the Bengals. 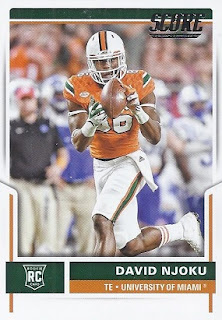 Nothing really much of note here, so I'll give the most interesting card nod to this David Njoku, and his "Omigod! They actually passed me the ball" facial expression. 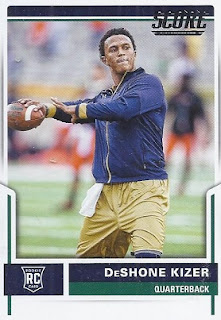 As dull as pack 10, so I'll highlight one of the few cards without a college logo on it, since Kizer's Notre Dame isn't part of Panini's licensing.

And there you have it.
Posted by buckstorecards at 08:36