All about the Penmanship

Seems like a good day to show off the 4 newest cards for that binder. 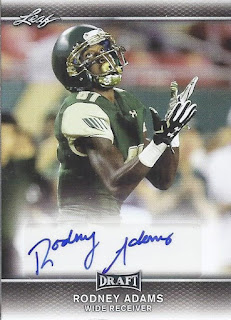 I'll start with one I fell in love with as soon as it showed up on Too Many Manninghams's blog. Every letter legible, and quite similar to how I sign things, with a very noticeable difference in size with the upper and lower-case letters. Rodney, despite playing WR, wasn't a rookie premiere guy this season, which was somewhat surprising even for someone in the 5th round. That might mean his future cards will remain legible. 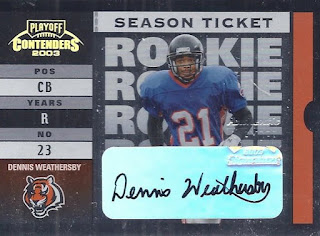 Going back a few years for a hard-luck player in Dennis Weathersby. Just days before the draft, he was shot in a gang-related incident of mistaken identity. That limited him to 4 games in his rookie year. Then he was in a coma after a car accident next off-season. He never played again after that. His wiki article says he was then training to become a teacher and had taken firefighter tests. And he has a really nice signature as well. I love the bottom part of the 'y' stretching back to cross the 't'. 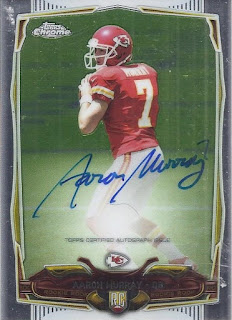 Aaron Murray's autos are a bit of a crapshoot. Mostly, they're just initials but fortunately COMC's look-before-you-buy allows me to hunt down a more legible one. My only complaint is that the #7 can look like a question mark. 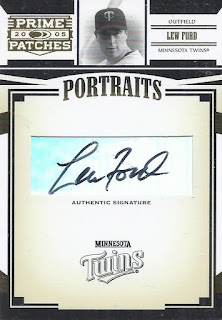 Lew Ford's was pretty consistent across his autos. I wonder if he was on the receiving end of a Harmon Killebrew admonishment early in his career.

And there you have the 4 new names.
Posted by buckstorecards at 09:49