Four if by Sportlots - Part 3

A worthy use of my 4 card limit, as these 3 put the final nails into the coffin of 2013 Pro Debut. Jimenez seemed to be the Blue Jays catcher-of-the-future for several seasons, but was released in February and is in the Texas system now. Chris Reed pitched 4 innings over 2 games for the Marlins and retired in February. Pat Light saw action of the Red Sox and Twins last year, and is now in Pittsburgh. 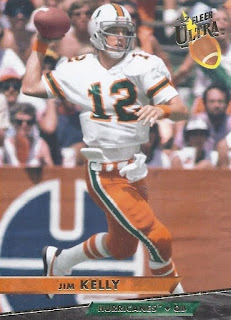 And there's no better 4th card for the envelope than yet another 2/14 card. This is my 67th Jim Kelly card in the binder.

And there you have it!
Posted by buckstorecards at 08:15