Still with box 1, and the inserts contained within. 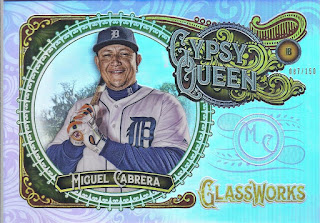 Box toppers can be found in this season's release. Despite the Glassworks name, these aren't going to be mistaken for glass. They're merely chrome-ish. These are purple parallels, the most common of the parallels.

There aren't any minis in this release, but these are as close as you get. They're the same height as regular base, and about a half-inch narrower. They offer predictions for how the player will perform in the upcoming season. While it would be interesting to re-visit as the season moves forward, I'll probably have forgotten about these by then.

Painted cards! They might not be Diamond Kings, but I'll still welcome these to the binders. I guess that Sale was painted early in the off-season. But each player gets two cards in this, so the second Sale has him with Boston. 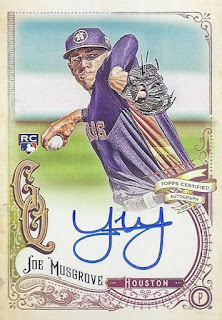 Auto 1. It is definitely a unique-looking auto. The J followed by the M and an open-topped G? That's my attempt to parse it. 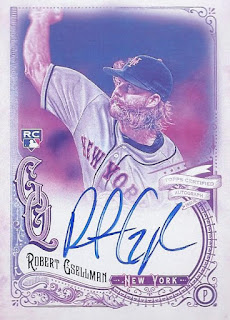 A Mets auto is a great way to wrap up a box. Still one more box to get to. I'll probably skip on the base cards in that, but will get to hits and parallels when I get around to posting it. Maybe tomorrow. Maybe next week...
Posted by buckstorecards at 08:35