I had realized something. My Bills binder is not nearly as bright as it could be. Hopefully, picking them up in a group break of Spectra would take care of that. 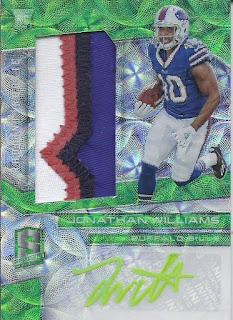 This is part of a Radiant Rookies subset, and radiant is certainly an appropriate adjective for this set. If you think it looks loud in the scan, you should see it in hand. Williams saw some action today in garbage time against the 49ers. 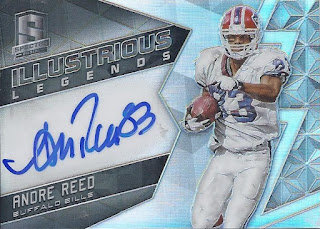 But if you want something a little more tasteful, here's a nice on-card autograph of a Bills HOFer. This is my second Reed autograph, joining a COMC purchased one from 2013 Five Star. This one is a little scarcer, being out of /99 as opposed to /115. It is a toss-up as to which on I like more, as the Five Star is from a higher-end set, but the signature itself is nicer on this one with the 83 being more legible.

Still, I love both as much as one can possible love an inked piece of cardboard.
Posted by buckstorecards at 13:31