In Which the Stalking Continues

I wasn't really planning on this box, but it went on sale for $29.99 for a weekend, so I decided to add it in. I do love the Clear Cut autographs in this product, and there should be one of those in this. And I'd get some cards to add in to eventual packages for football collectors I trade with. (Although nothing from this has been sent out in my most recent mailers) 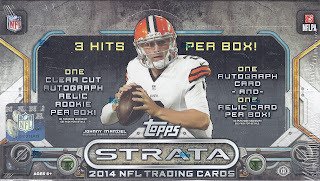 Great planning to have Manziel as your cover boy. But, he also  could be found on the box (sometimes alone, sometimes with other players) for Certified, Elite, Contenders, Limited, Playbook, Prestige, Prizm, Rookies & Stars, Spectra in Panini, along with Chrome, Fire, Platinum and Turkey Red for Topps. Oops.

With 18 packs and 6 cards per, certainly I'll land some Bills, unlike with the Prime blaster. Right? 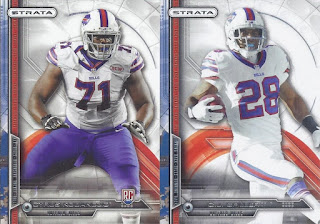 I landed 2 of the 4, with Manuel and Watkins eluding me. 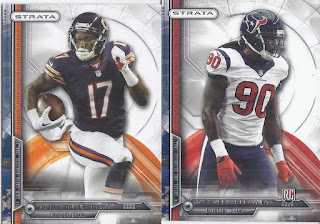 On the other hand, I did get base cards of both the 2/14 babies in the base set. 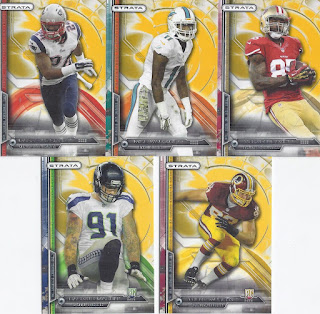 Falling at 1:3, I should have got 6 gold parallels. While it doesn't seem like it from the scan, I did. This box probably should have gone to New England, as I got a pair of Ridleys. Base collation: No dupes. Parallel collation: Not so much. 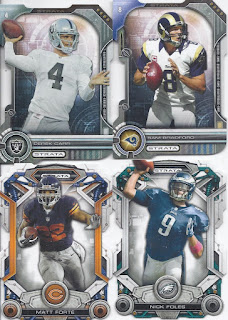 The die-cuts vary by position, but this seems about right. 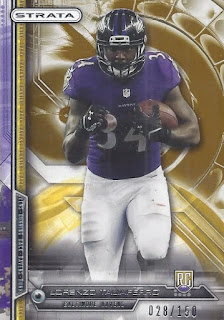 The only numbered parallel was this bronze one. 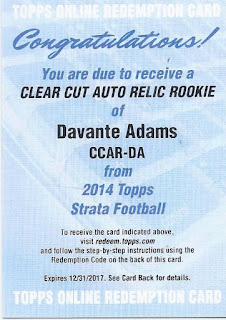 My promised Clear Cut was actually a redemption for one. Fortunately, these look to be live, at least based on the fact there are a couple for sale at COMC. I'll wait until it shows up to bring out the MST3K clip. I note that two weeks ago, I had no outstanding redemptions. Now I have three, each from one company. 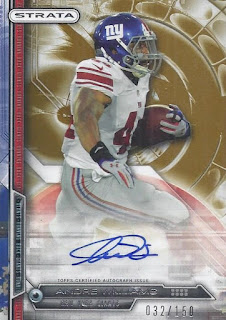 My autograph was a bronze parallel, and of course, it is of Andre Williams. That is at least the third, maybe the fourth hit I've pulled of his, by far the most of the 2014 rookie class in terms of pack pulled cards. But at least this was live. 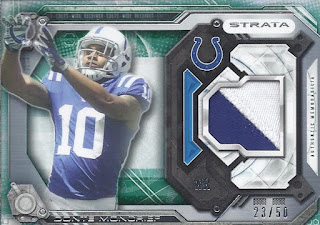 My relic was a relatively tough pull. The emerald parallel are 1:242 packs, so they're basically one per case. Small window on the card, but at least a nice patch.

At least I'll have a nice Packers card at some point. Next up, Field Access!
Posted by buckstorecards at 05:20