While there have been games already, I don't really consider the hockey season to be underway until your team has played their first game. For the Senators - that's tonight! So here's the Senators content from my COMC to-be-posted box. 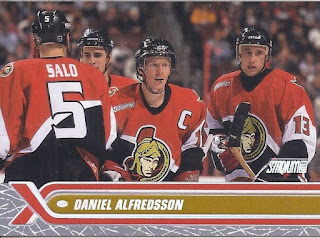 Nowadays, that tends to mean e-pack content. The only exception to that this time was this card. If there was a base Alfredsson that I'd been searching for, this one probably would be it. Sure, the jersey might not be one of the more memorable ones, but it features the team captain surrounded by teammates, so it is perfection. 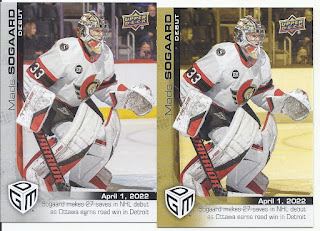 I've posted the scans of this e-pack acquisition before, but here's to actually having the card in hand. Mads provided the Senators only Game-Dated moment of last season, and when I got the card, I lucked out in also getting the gold parallel. These aren't serial-numbered, but the silver one is limited to 999 copies and the gold has 100. Sogaard will be getting a Young Guns card in Series 1, so I'll be able to pack-pull his stuff later this season.

Some green parallels. Since why not? 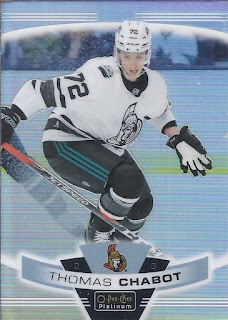 Of course, some of the e-pack sets  have parallels. Here's Thomas Chabot on the all-star jersey parallel from 19-20, and a uniform that traces to the 2019 All-Star game in San Jose. The teal on the shorts is also a clue. 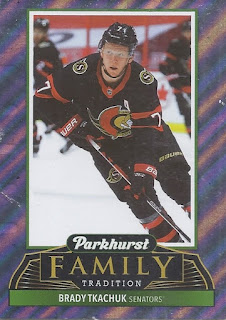 Brady warranted being featured in the Family Tradition insert set out of Parkhurst for a game against brother Matthew's Flames. Does that give him familial bragging rights? I'd like to think so, but probably not. 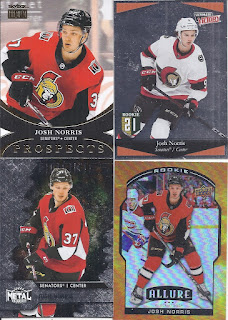 Josh Norris won the volume battle in this post with this quartet of cards. 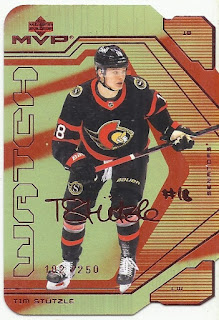 But it was this Tim Stutzle that was the best of the bunch, bringing both Colours and Contours to his card. I was actually fortunate enough to pack-pull (or e-pack pull) this numbered beauty. And Tim does have a pretty nice replica signature as well.
And now, the season can really start.
Posted by buckstorecards at 07:32