The box promised 4 autographs, and that's what I got. No points here! 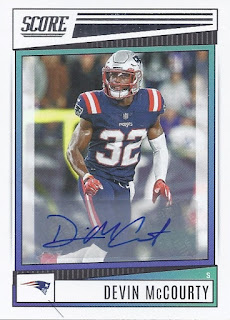 There's a deep checklist used for Score, which means there's lots of chances to get autographs of players you don't see many autos of. Devin McCourty certainly counts as a player that doesn't show up frequently. He's also about as close as I will get to eventually finding an autograph of a player who's name at least sounds close to my last name. Fix the spelling and take away a syllable, and you're there! 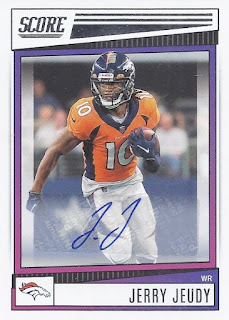 Jerry Jeudy was a rookie in 2020 with a lot of autographs available that season. For that reason, this feels like a sticker dump, even coming off a pair of decent seasons. Maybe the Russell Wilson thing will work out to his benefit. And  at least his initials are legible. I'll be thankful for a pair of legible J's when I get to the next one. 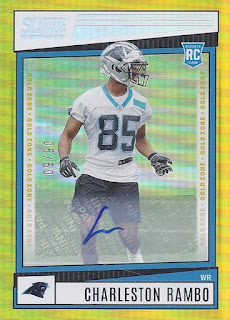 That is because this autograph is horrid. A player with as great a name as Charleston Rambo should not have a signature as lazy as that. He was cut by Carolina at the end of training camp, so at least that signature shouldn't be appearing in too many more packs as the season ends.
Although I do take back everything I said untoward about the James Cook auto I got in a Bills group break. At least I can recognize the letters. 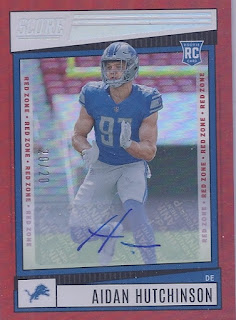 As I always say when I bust a box, if I can't pull a great card for the ol' PC, I might as well pull one for one of my trading partners. And this card of the #2 overall pick out of Michigan to play in-state will be heading to Ann Arbor in a future mailer. Aidan might be yet another member of the Sketchy Penmanship Class of 2022, but I don't think Dennis will care. And one more letter can be parsed than on  Rambo's.
There you have it!
Posted by buckstorecards at 11:33