With the Expo starting later today, I'll probably be bringing home plenty of new 2/14 cards. So, I might as well reach into my COMC to be posted bin and clean out the current contents. 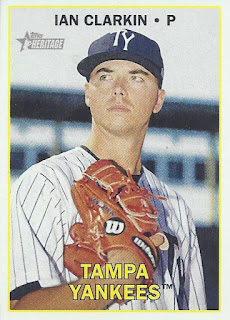 Yankees prospect Ian Clarkin has made several Bowman appearances in my binder, but this card from last year's Heritage Minors is his first appearance on a Topps product. He's now in double digits with 10 cards. 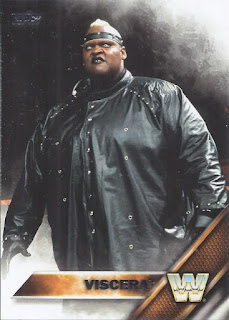 Whether his card is as Mabel, as Big Daddy V or as Viscera, this is the 4th card in my collection of the late Nelson Frazier. 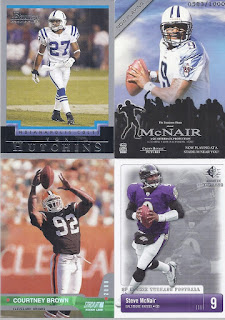 Football content was there as well. Steve McNair ties Alshon Jeffrey for 2nd overall among that category with his two cards here at 51 cards each. I love the design on the Rookie Threads card, with it being a nice usage of two of the same image. I'm also glad they did a movie themed insert without using a Remember the Titans reference. Courtney Brown reaches 13 cards, while Von Hutchins gets his 4th entry. 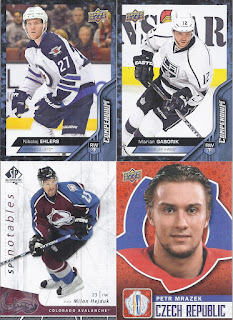 The top 2 cards from hockey are from the e-pack release of Compendium. Let others pay for the e-pack, pick the cards up at 30 cents of COMC credit. Always a good plan. And more familiar faces on the bottom, although I'm disappointed Mrazek didn't have his World Cup mask featured. Peter Griffin as King Kong climbing the CN Tower to plant a Czech flag? That's amazing. He and Ehlers are at 12 cards, with Gaborik remaining in the lead with 151 over Hejduk's 137.


Posted by buckstorecards at 10:13