Just one pack, but 40 cards in the pack. That's enough for a single post. 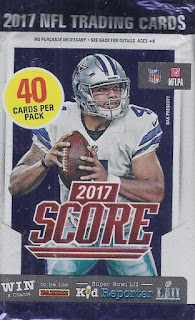 Like a lot of the products from late last year, a Dallas Cowboy is on the front of the pack. 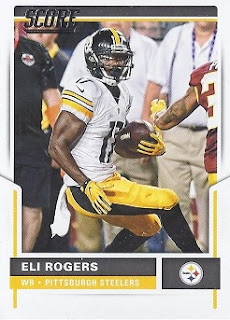 First base card out is this. I like the colour on the base, but really wish they'd shifted the name and logos down to get rid of the large white space on the bottom in order for there to be a little more room for the photo. 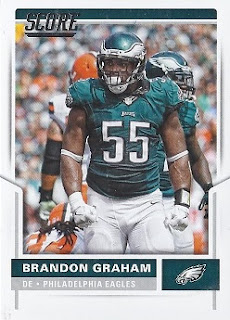 But the photo choices are somewhat bland and generic running photos, so this action-less photo becomes the most interesting in the batch. 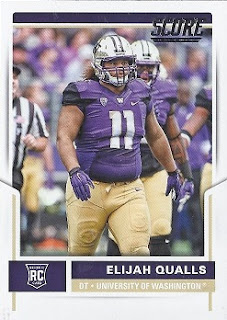 Rookie cards do a small shift for the name portion, and replaces the college logo with the RC logo. The college team's logo should be visible on the back. Qualls went in the 6th round to the Eagles. 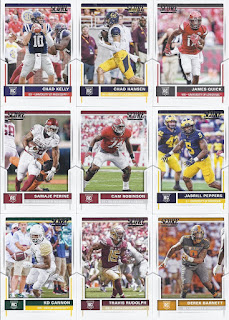 Here's the rest of the rookies, when they went and where they went to:

From first rounders to undrafted players - an interesting variety. There's a slight chance I might build the set, so I'm going to hold onto these in the meantime.

I didn't land any Bills in the pack, so I picked up their three draft picks among the 100 card rookies. 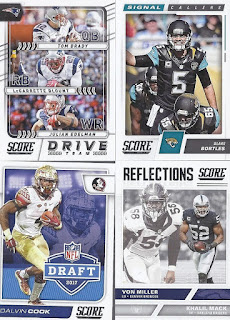 Inserts! Nothing too memorable here. 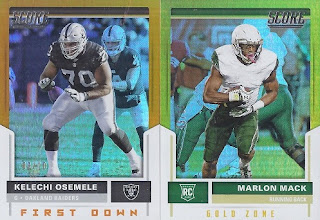 No autograph in the pack, but a couple of low-numbered parallels were the big hits within. While gold cards around Panini products are usually /10, this time they are /50 while the First Down orange parallels are the /10. I guess Panini doesn't have the right to the South Florida Bulls logo, as that has been 'shopped away, and they use the NFL logo on the back.

And there you have it. Pretty much nothing but hockey the rest of the way home.
Posted by buckstorecards at 09:31