To recap, Target Canada closed its doors earlier this year. I picked up a pile of their discounted repacks as they went through liquidation, with the plan to post them as the year went on. I've still got about 10 or so to go, so I've really done a good job making them last. Now, time for another one - this one a hockey repack with 3 packs and a relic hit. 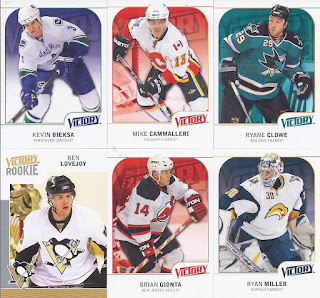 Starting off with the blandest of the packs - 09-10 Victory. It is rare that I came across a hockey pack repack that didn't include at least one pack of this. They're nicely colourful, and I kinda with that UD had brought this low-end hockey product back as opposed to MVP. As for the cards, I really like the colour usage on the Clowe, and I can think of someone that would like that Cammalleri. 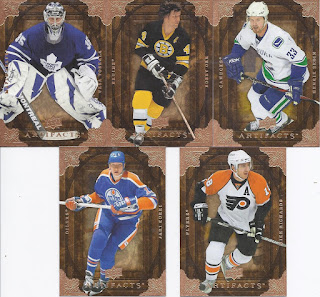 Probably blander, at least aesthetically, is 08-09 Artifacts. But, a pair of Hall of Famers, a Rangers alum and a mask binder card make it more interesting. As usual, the Sedin is the odd man out. 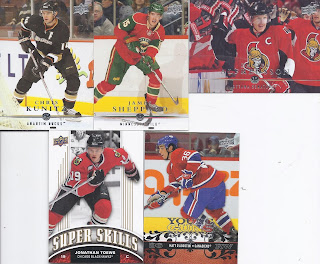 And the big winner pack-wise was the 08-09 UD. A Young Gun (albeit not a major name) and an Alfredsson wins it. Actually, the Alfie card would be enough to take the title even alongside a quartet of bland base cards. 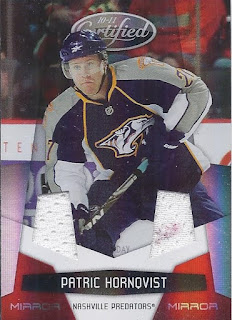 I hope that's a food stain from the locker room...
Posted by buckstorecards at 12:35