But no LCS boxes since Boxing Day. 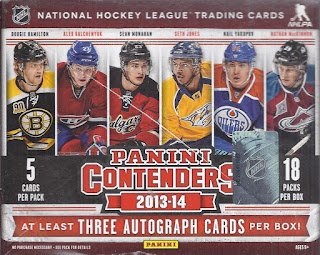 While I won't post the base cards, I did well enough that, when combined with some cards I already had, to put myself only 10 cards away from the 100 card unnumbered base set. Which I took care of with a sportlots order. 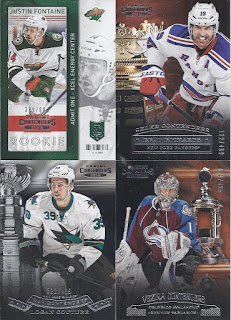 Here are the numbered cards and inserts I ended up with. If you don't think my favourite in this bunch is Brad Richards looking a serial killer, you don't know me. 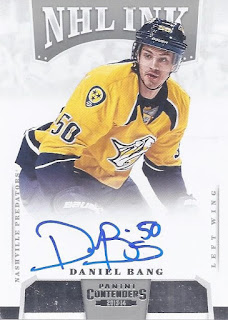 Here's the first of my autos. It is on-card, which is always a bonus. And it is of a guy named 'Bang'! A great name, if not exactly a major name in the NHL. He spent 8 games with the Preds in 12-13, and has been in Switzerland the past two season. 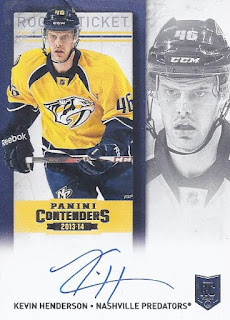 The on-card Predators content continued with the second auto. He has 4 NHL games to his credit, again during 12-13. But he did pot a goal during this time. He's been in the Dallas system the past few years. But, more importantly to me, he's a Kitchener Rangers alum! He spent 3 seasons here in the mid 2000s. So, while this wasn't a big super big money pull, hitting my PC is nice. And he does have a nice initials only autograph.

This is also my first card of his in the collection, auto-ed or otherwise. 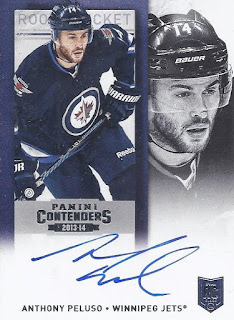 My first auto of a guy with more that a single digit worth on NHL games to his name. I was hoping he would be the son of one of my favourite crazy Senators alum in Mike Peluso. Sadly, that is not the case. 3 for 3 for on card autos though. 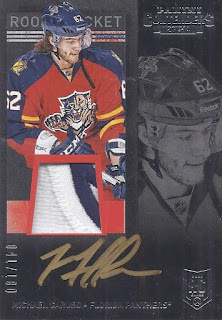 One of the packs seemed thick when I opened the box. I assumed it contained a patch auto, and it did. This is the type of card that feels like a special pull, even if it is not the most marquee of names (2 NHL games only). The white jersey works beautifully with the background on the black parallel, and the gold pen works even better. I'll have to look closer, but this might be the first gold pen auto for any sport in my collection.

So. Nothing major, but one card for a PC and an aesthetically pleasing gold auto still made it a nice break.