Several trade envelopes have shown up over the past week. The highlights of these were some major damage to my set building wantlist. They wrapped up '14 Update, and knocked both Panini Classics and '15 Archives down to 3 cards each. Along with a couple of GQ cards. My set want list should be revised as the week progresses.

To those that sent all those goodies, thanks for all the damage. There were way too many cards to scan to make individual posts. But, there were a few things in the packages outside of those, and I'll show off them now. 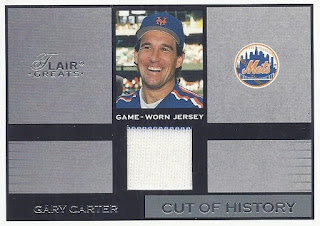 This might have been the only card in those envelopes that wasn't part of a set build. Courtesy of I Love The Smell of Cardboard in the Morning, this is the first Gary Carter Mets jersey swatch in my collection. There's a hint of pinstripe at at the top. A pair of relics were included in the swap, and this was mine.

I just wish I'd known what he'd paid for shipping - I would have thrown something else into the goodie bag. I'll be throwing something Denver Bronco-related into my next COMC shipment to make up for that.

And that was it for cards that weren't part of various sets I was trying to complete. 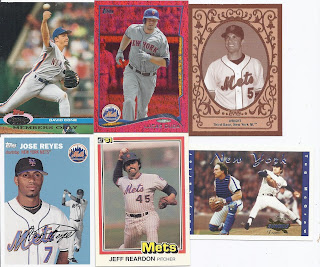 Fortunately, a PWE from Shane @ Shoebox Legends kept this from being a one-card post. A Mets card in the lead means I should start with the Mets in the PWE. The Members Only of Cone salutes a nine-pitch, nine strike performance against the Reds. Which leads into a very red Lucas Duda parallel. After that, a pair of cards from the Trading Card History insert set. "Jeff, your rear's done!" - TM MST3K, and finally a card from a set I knew nothing of. It's a 2001 card from those incredible card makers at Sunoco and/or Coca-Cola. It is glossy and quite thin. 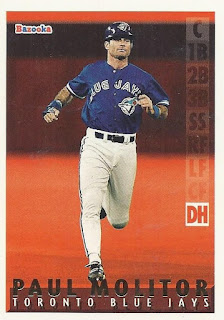 Only one card for the Blue Jays collection, but it continues the parallel goodies from the Mets portion of the mailing - this being a red hot parallel from 1995 Bazooka. 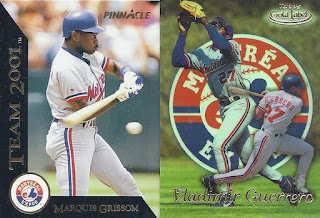 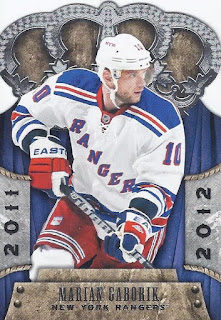 There was but a single hockey card in the envelope, but this will mean another Marian Gaborik in my 2/14 collection. He still trails Milan Hejduk for the overall lead 88-84. 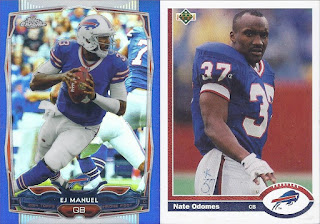 And a pair of Bills to wrap this up. The Blue refractor looks great with the Blue uniforms, seeing as they are so close to the exact same shade. And the Odomes takes me back to better times. When the team actually made the playoffs.

And keep your eyes peeled for a return PWE, which got dropped in the mail last week.

Posted by buckstorecards at 13:49