Namely, the 18 Bills cards for a dollar picked up at the flea market.

Interestingly, in terms of currently playing in Orchard Park, this repack went 0-18 with players still there. And it wasn't junk wax era either. This included cards from last year. 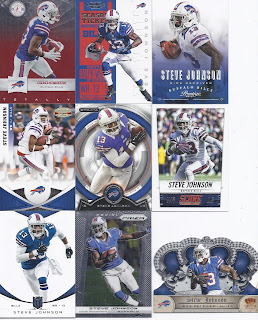 Case in point. There's Stevie Johnson cards stretching from 2011 through 2014. Sure, he's gone, but at least there's variety. And I can pick my favourite design from this group. Which here, will go to the always interesting ticket motif on the Contenders. 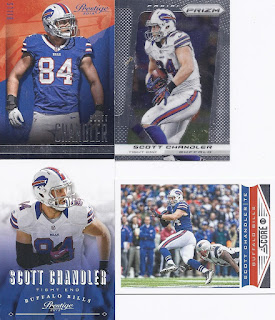 Scott Chandler was a distant 2nd with 4 appearances. He's with the Patriots now.  Still, a great design on the Prestige, and a great photo on the Score. 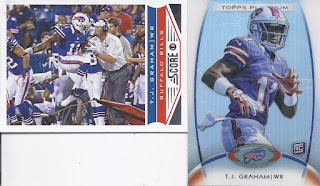 Only one more multiple appearance guy, and it is TJ Graham. Cool photo always wins over merely being a shiny card. 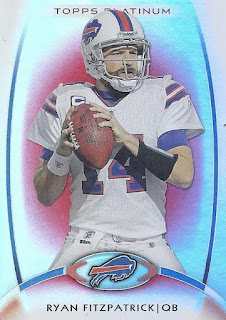 But at least this shiny one is a ruby parallel. Of yet another member of the post-Kelly infamy. I've just realized that Kyle friggin' Orton might have had the most respectable year at QB since that one Flutie season.

There is a reason this team hasn't had a playoff game since the Clinton administration. 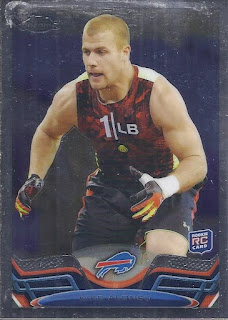 It has been too long since a card reminded me to clean my scanner. This is Kiko Alonso, for those that don't want to kill their eyes trying to read the name on the bottom. 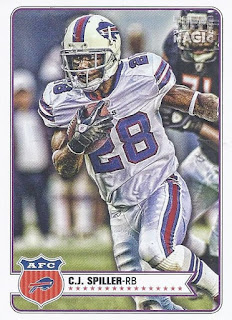 And to wrap it up, here's probably my most missed product from last year, with a Magic (aka Gypsy Queen football) from 2012 Magic. Although that product really didn't do itself any favours in 2013 with its hit content making it really tough to pull a decent player.

Still, despite there not being any current Bills, this was still a very well spent $1.
Posted by buckstorecards at 17:26