I was planning to sample Ginter this year, but looking at the checklist, there really was only one chase for me at first - the Thunderlips card. After the events of last week, that was no longer a desired card, so there wasn't any real desire for me to sample a pack or two of the product. So, unless I see some retail of it out there, I'll limit myself to hunting down Jays and Mets.

Fortunately, Panini Prestige football dropped this week. While I did grab Buffalo in a team break and hope to have a good # from that set on the way, I still wanted to sample the product. As a bonus these two packs were cheaper than two Ginter packs. 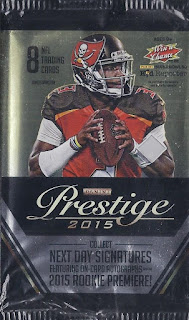 His being on the package was the closest I got to pulling a Winston from these packs. 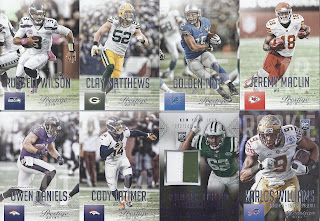 And my first pack. I don't know if I can call this true full-bleed as there is some fading at the edges, but I really have no complaints about the design. I did get my first in-hand football hit of 2015, with this nice thick patch from Leonard Williams. It is a /100 purple parallel. He was the 6th overall pick in the draft, so it is a pretty nice card. And there's a Bills card to end the pack. The rookies are SPd to 1 per pack, so I'm not sure if I got the Williams in that. If I did, then there's one more card that will find its way to the clubhouse. 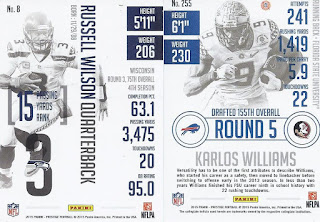 The back are somewhat threadbare, but still not as bad as last year's Contenders. At least there are some stats on the back, and a little biography on the rookies. 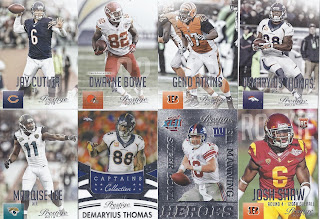 Pulling a patch relic and a Bills card made the first pack gave #2 a tough challenge, but I still got some nice cards. I like the contrast on the Bowe. Chargers logo in the background. Chiefs uniform. Browns as the listed team. Nice. The Thomas is a die-cut acetate card. The Manning is one of those micro-etched cards. Neither one is numbered. All 4 of the Broncos cards will likely find their way to I Love The Smell of Cardboard in the Morning at some point.

And there you have it.
Posted by buckstorecards at 16:43