Namely, a pile of Bills cards from a recent case break of Bowmans '15 issues. 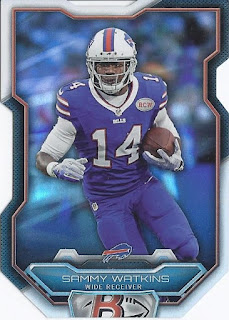 I'm going to this in terms of card volume, so I'll start with an insert card that I only got 1 of. The Bills didn't have any base autographs in the whole set, so that's really going to limit the take from these breaks this year. On the upside, at least they'll be a cheap date in 2015. 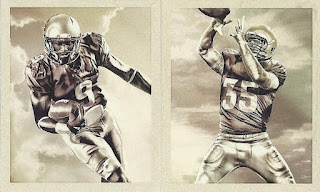 MINIS! These fall 1 per pack, so there are 100 per case for a 110 card insert set, I batted 2 for 3 for this mini set. I'll need to find a Dezmin Lewis to finish this off. These two are Karlos Williams and Nick O'Leary respectively. Both Florida State products that Buffalo grabbed in the 5th and 6th rounds. Lewis was a 7th rounder.

Yegads. The only Bills rookies in the set are late round draft picks. What are the odds of the other guys showing up? No 1st or 4th round pick in '15, but there's still 3 left.

2nd rounder: Ronald Darby (another Seminoles alum). He's a CB, and did get a card in the Panini NCAA releases, and also appears in Score and Upper Deck base sets.

3rd rounder: John Miller. Like the companies are going to waste a valuable rookie spot on some OL guy.

6th rounder: Tony Steward. A LB. He's an outsider for some random appearance.

As I said earlier, at least the Bills will be a cheap date. 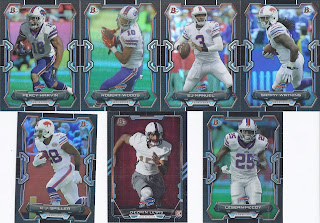 But at least I got a Lewis among the shiny parallels. The base set is 110 cards, so the Bills did better than expected for base cards with 6 players, albeit 2 photoshop specials and and a third who is no longer on the team. 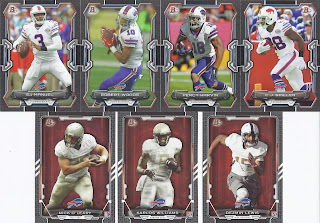 I got 7 different cards each of the black border parallels and the shiny ones, but more black bordered overall. Here you can see the rest of the cards comprising the Bills base set. The Nick O'Leary wins the factoid war of the card backs, revealing that his grandfather is Jack Nicklaus. Perhaps he can be a ringer when they set up teams for off-season golf games.

Which, since it is the Bills, will probably be in early January.

Because they're the Bills. 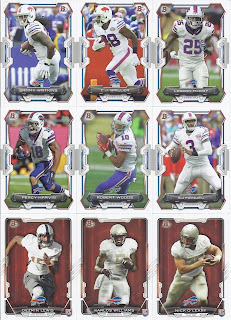 And that leads to the base cards. 9 cards. Perfect for a page. The best of these is seeing the classic logo on a pair of cards.

And that's your 2015 Bowman Buffalo Bills.
Posted by buckstorecards at 15:30