And the climbing continues. Maybe I'll get this done before I crack a pack or two of flagship. My second card from the early days of the Senators. This is actually a team checklist card, and one with an interesting twist. Despite being featured on the front of the card, Peter isn't part of the checklist. The first part of the set only had a couple of posed photos for members of the expansion teams. Peter wouldn't get an official appearance in a Sens uniform until Series 2. 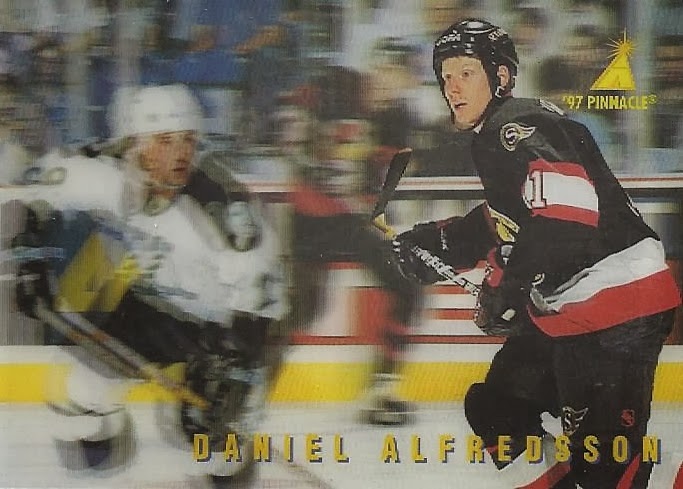 Pure Sportflicsish gimmickry. And I love it. Coming off his rookie season, despite winning the Calder, it is really nice to look and see him in the beloved McDonalds sets. 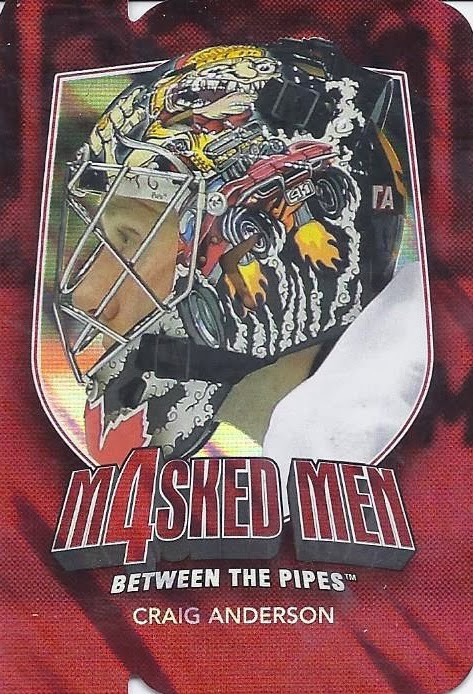 The first of three mask cards to make the top 20. If I had one complaint about this, it is that this is his racing themed mask, and not his heritage mask. If it were, this would be an easy top 5 card. 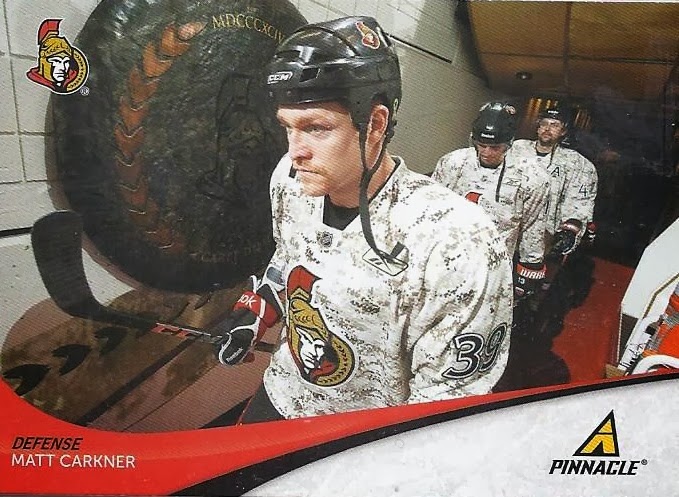 A cardboard appearance of a rarely worn jersey style? Yes, please! Even better, it features a tough guy type who you're surprised to see get a base card in this set. 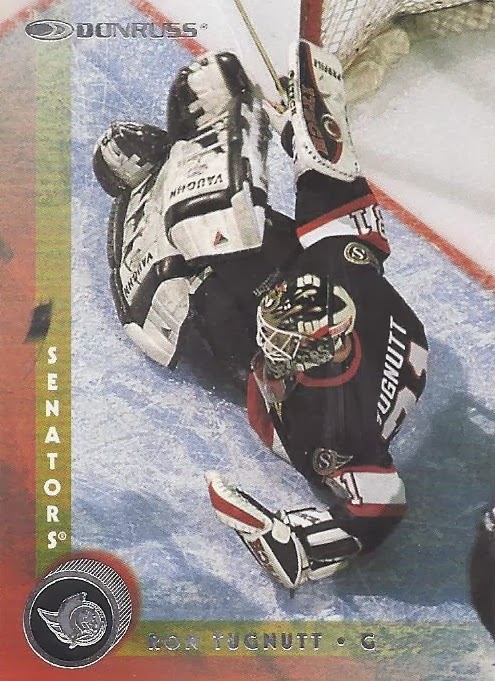 Another one that made my list on the base of photo choice. It's an angle you rarely see on hockey cards, and a position you don't see enough as well - stacked pads. 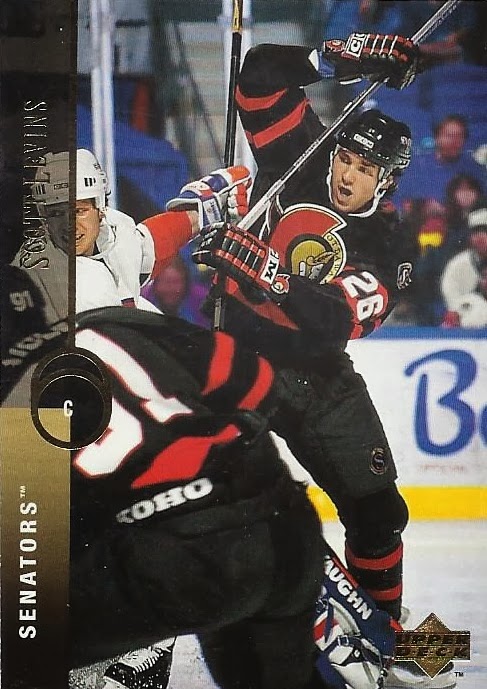 If there's a card in my Senators collection that better shows all of the little scraps and struggles along the ice, then I didn't see it when searching through my binders and boxes. 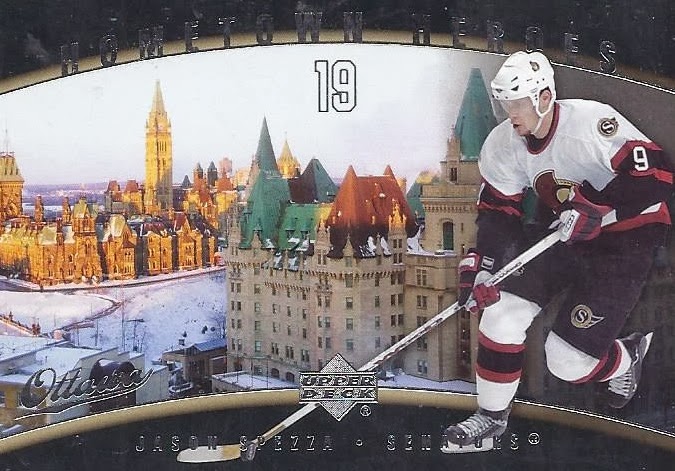 I love when the cards work the cityscape into the design of the card. In fact, there are 3 more cards that feature the geography of the capital region in their design to come, all of which are in my top 10. Why isn't this one there - it's the winter scene. Seriously, once you lived through one Ottawa winter, you won't be too crazy about seeing it commemorated anywhere. 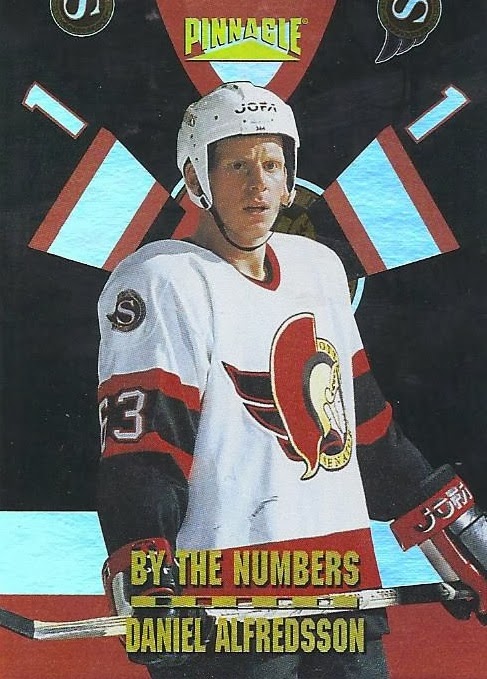 I picked this one up in a trade w/ Fuji. It was a sweet addition, but it's even better for the contrast. The #11 jersey is prominently featured, both on the front and the back. Yet the photo choice shows him wearing #63. There's only a handful of those out there, and of my 124 Alfredsson, it's 1 of 3 where he's not in Senators #11. 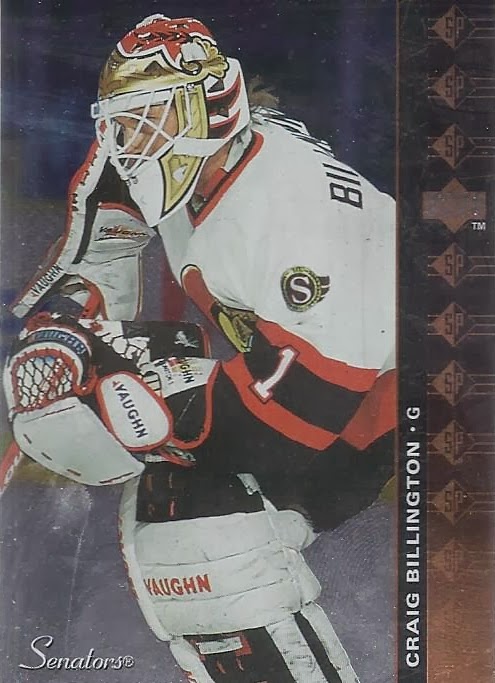 And to wrap this one up, another mask card. Two of my favourites were Alex Auld's and Billington's since they worked the helmet on the Senators logo into their masks. Billington had a better photo on his, so that's the one that gets this lofty position.

So, that's it for this with only 10 to go. Doing this has actually been pretty easy to date, but I'm not looking forward to my top 10. #1 is pretty much set, but 10 through 2 will probably switch places a lot of times before I finalize it.

Posted by buckstorecards at 17:27