A whopping 3 new cards for my Rangers alumni collection. For those that have no idea about this, the Kitchener Rangers are my local Ontario Hockey League club. Collecting them is kinda like collecting people that went to your favourite NCAA team/alma mater. 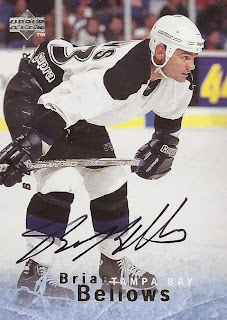 Firstly, a member of the Rangers in the early 80s, and the top forward on the team to bring home the Memorial Cup, Brian Bellows. He had a good run in the league, so it is disappointing he doesn't show up on more hits in retro themed sets. He's probably #2 in terms of forwards that have made a stop here. Only HOFer Bill Barber would be ahead of him. 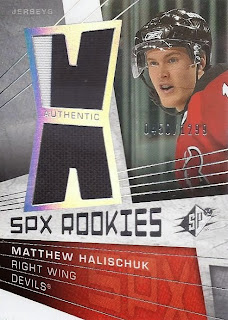 A nice 2-colour swatch of a Rangers alum for a dollar? Sure thing! Matt moved on to spend some time with the Predators, and is now in Winnipeg. 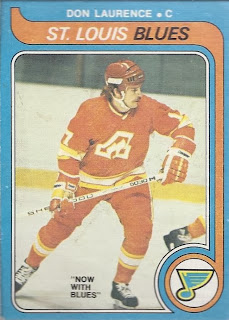 And finally, Don Laurence. His time in Kitchener was from the time period where I barely knew what hockey was. He moved on and spent a year with Atlanta and part of a year with the Blues. He only had cards this season. He drops off my Franksenset list, leaving only Claire Alexander from the 70s, and Jason Akeson from this year's Panini releases. Not bad, and I should have no problems sticking this Frankenset to bed in 2014.

I've got about 30 more to go from this COMC purchase, and I'll get to all of them at some point this month.
Posted by buckstorecards at 16:48