Time to show off a card that is most certainly going to be a centerpiece of my Canadians in MLB collection. It arrived today from COMC and is most certainly worth taking a break from my Senators countdown to show off. This one is also the second major card I picked up from selling the Nathan McKinnon YG. I might as well add two major wants for my collection for a card I had little interest in. 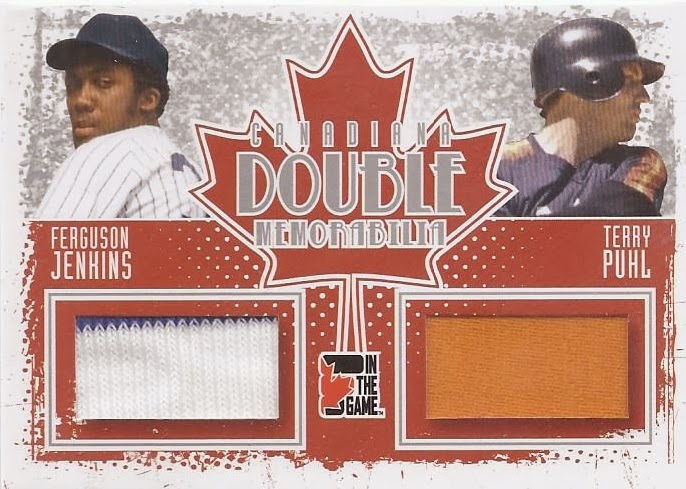 This double relic comes from ITG's Canadiana set. Think Americana set, just with Canadians, and a far lower print run. This card isn't numbered, but the silver parallel was limited to 90. There's tons of variety in this set. Want a swatch from Trish Stratus' pants? A piece of Rich Little's shirt? A Stephen Leacock base card? A Chantal Kreviazuk auto? It's all part of the set.

When it comes to baseball, there were three subjects. The two you see above, and Larry Walker. Walker also made on card appearances with Terry. However, since I did have a Walker relic, and didn't have either of the others, it was easy to decide on this one. Plus, who else but me (and perhaps a Dimwit), would be interested in a relic card that featured Terry Puhl? With the bonus if it being a bright orange swatch. Actually, all the cards of Puhl from this set I see are bright orange, yellow or red, so these might be from the early 80s Astros unis. No plain white swatches there.

And it's a bonus with the slight pinstripe on Jenkins. $7.75 for this card, meaning I still had about $8-$10 left to spend on other cards before hitting SHIP on it. I'll get to those, which saw me add 5 new faces to my 2/14 collection. 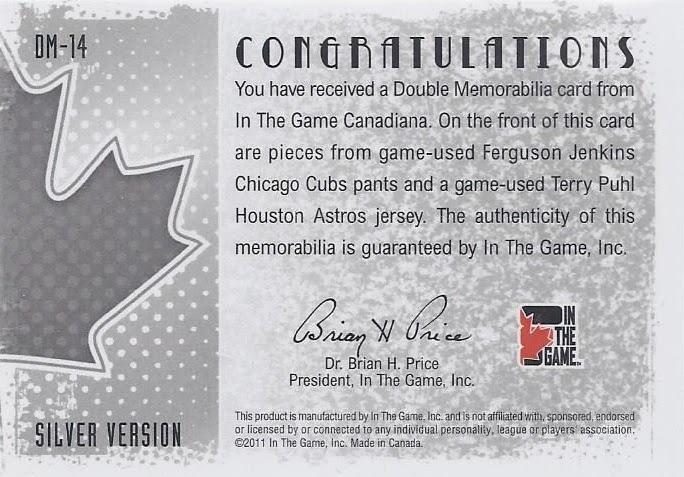 So, there's the newest beautiful addition to my collection. Even if book value folks would recoil with the horror that I'm happy about the cards I got in return for the sale. Too bad for them.
Posted by buckstorecards at 17:24