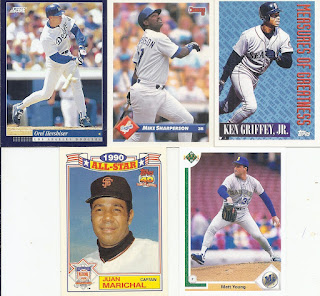 With all respect to the Shin Soo Choo card from yesterday, it really isn't going to touch the amazingness of a moment of impact with a pitcher at the plate. Getting a Griffey and Marichal appearance in there as well also contributes to a very solid start. Who says you can't have interesting junk wax era stuff? 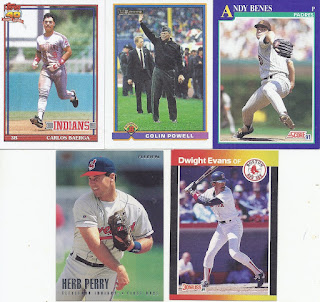 In terms of people I wouldn't think I'd pull baseball cards of, Colin Powell would certainly count as one. That isn't alone in 1991 providing some interesting cards, as we get a bare-headed player on the basepaths, and the Wrigley ivy as well. 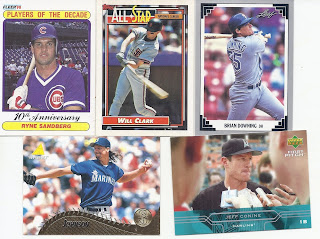 The 90s get left behind, and it is an interesting card that gives us the first taste of the 2000s with Jeff Conine getting interviewed during his second stint with the Marlins. But there's still nice star power as we say goodbye with a couple HOFers. 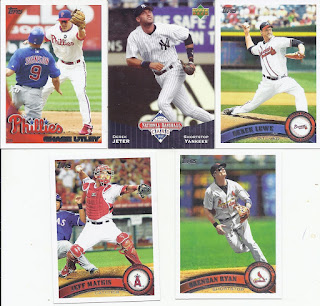 This particular portion of the repack ended with a streak of 2011 Topps, and yet another HOFer is a great way to wrap up the non-2011 portion of this. We do have National Hockey Card Day in Canada, but it really needs to expand to other sports and issues. National CFL card day? Yes, please! 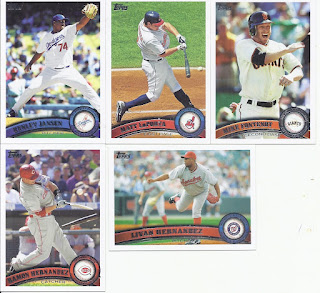 Obviously, the repacker noted that Orel card that opened this up, and decided that it really wasn't enough of a  "moment of impact" card in this, and decided to add in that Ramon Hernandez to spice it up even more. I approve.
That wraps up the repacked cards portion, but I still have a bonus item and 4 packs to get in the next two posts. There you have it!
Posted by buckstorecards at 07:19