About a month ago, I came across a repack that I'd busted a couple years back, but never got around to posting. I just found a few more of those. These date back even further, and by even further, I mean to when Target was still a thing on this side of the border. So, these were busted about 7-8 years ago.

Nothing like a timely break. And I also came across football and basketball ones that qualify as these. But, I'll start with baseball today. This was one that contained 4 packs, a 'mystery item' and 50 random cards. I'll begin with the first half of the 50. 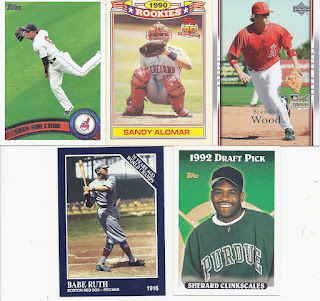 There were no visible cards, as everything was in a small box. But I guess the Choo card would count as opener. While there is a Babe Ruth in there, I have to give the nod to the card featuring somebody named Clinkscales. It is a shame that he never reached the bigs, if for nothing else than the chance of there being jerseys with that name on the back. He's no longer affiliated with Purdue either, but Indiana State. 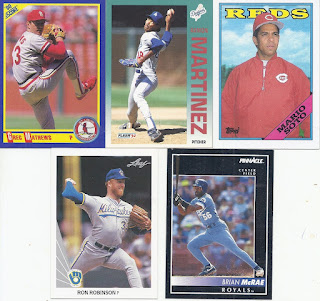 Not too much here, but I guess the bearded greatness of Ron Robinson is the highlight. 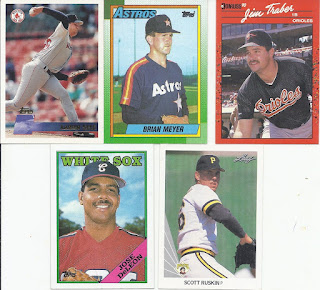 Mesh jerseys were a mistake,  Other than that, nothing much to say about this group. 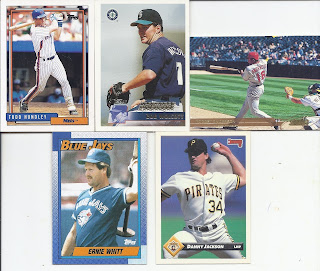 Mets content! Jays content! And that Garret Anderson Stadium Club entry isn't just a magnificent photo, but the card itself is a Royal Gold parallel. And it also has the thickness of a higher end card. To think that not only was this great card hiding among the junk wax years in a repack, but that it was also hiding from my showing it off. 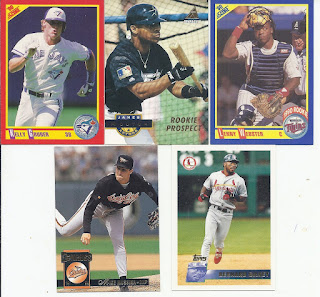 Here's the final 5 in the first portion. And a card with both bunting and batting cages are a perfectly fine way to end it.
There you have it!
Posted by buckstorecards at 09:38