I'm shifting from one card yesterday to a whole bunch of 'em today, and Buffalo content from three cases of recent product. 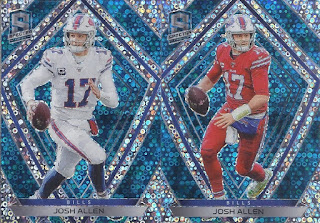 Spectra may not have brought the volume into the collection, but it did bring the loudness. And the whole red, while and blue vibe from these two Neon Blue parallels, both /60, are pretty patriotic. 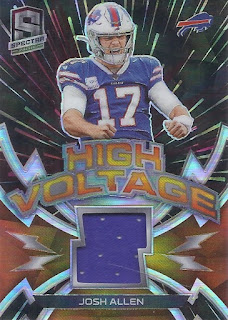 But at least there was a hit in this. Not exactly as High Voltage in terms of brightness as the name would indicate, especially in comparison to the base parallels, but at least it contains a swatch of jersey that may have, at one point, been in close contact with Josh Allen. 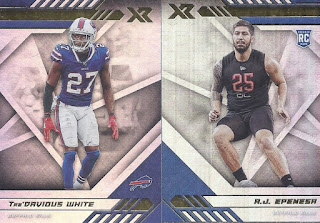 XR was kinda strange, as I only got two unnumbered base cards. 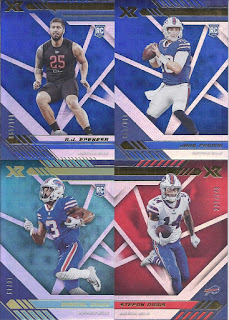 But I did get 4 numbered parallels. Does that mean these are not as scarce as the regular base cards? Probably not, but collation can always be interesting. This photoshop special of Diggs is my first Bills card of his.

Also, a trio of numbered parallels. No hits in XR, but a nice variety of colour made up for it. 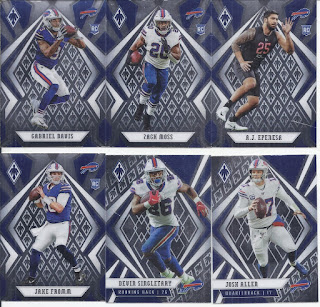 Things did return to normal in terms of parallels/base with the Phoenix release. And some variety as well with the colour. The orange and red Singletary entries are /99 and /299 respectively, with Epenesa's teal card being /149. And I learned, via the back of his card, that Zack Moss is the cousin of both Santana and Sinorice Moss. 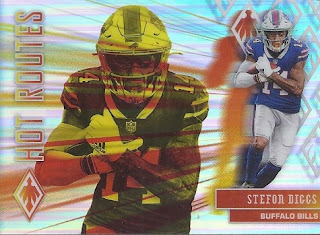 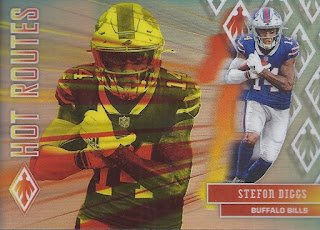 My first inserts of Stefon Diggs. The bottom one is a bronze parallel /50. 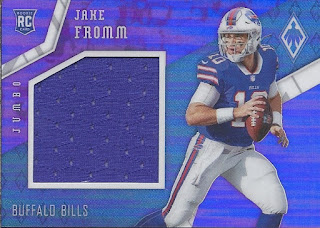 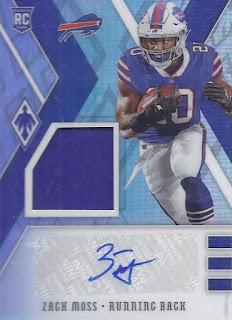 All these Bills wrap up with my 3rd relic and 2nd autograph of Zack Moss combined on the same card. The 3rd rounder has seen a bit of action so far, and picked up his third TD of the season last week against Seattle.
And there's a whole bunch of new Bills. Next up, far fewer Raptors.
Posted by buckstorecards at 15:00