When I hit ship on my latest COMC cards back in May, I was given an arrival date of late September. It showed up yesterday, giving me a 6-week bonus.

So, It looks like I'll be highlighting these for the next bit. First up, it was the major portion of the shipment, knocking out a bunch of cards from my set build of 2013-14 Rookie Anthology. 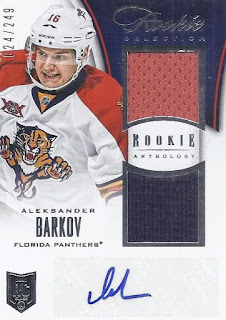 I'd already landed many of the major names from the Rookie Selection portion, namely the McKinnon , Galchenyuk, Rielly and the Forsberg. While I'd pulled several Barkov auto/relics from the other sets, I never got one of these. 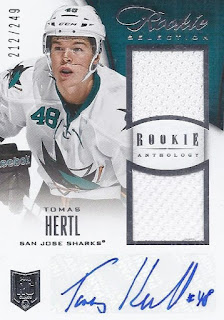 If not for the Barkov, this Hertl would have been the big name. 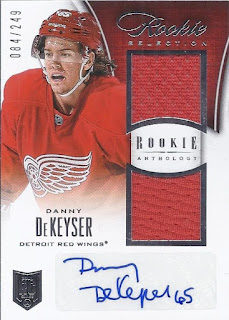 The penmanship skills of the Dual Rookie Class weren't exactly the best, so that really leaves the battle between DeKeyser and Hertl for the nicest autograph in the group. 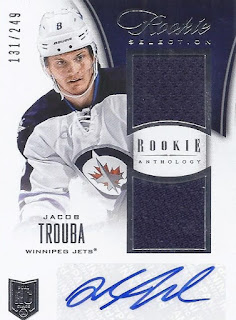 With apologies to my regular trading partner in Ann Arbor, I'm keeping this Trouba for the set. 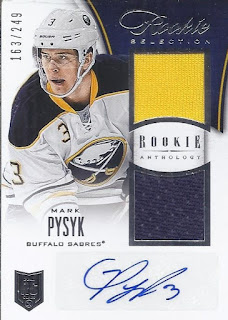 There ended up being 13 total Rookie Selection cards in the shipment. Of the rest, I'm highlighting this because with the somewhat unexpected yellow swatch to make it the most colourful of the bunch. I now have 90 of the 96 cards in hand, 2 outstanding redemptions, 1 never-fulfilled redemption (Up yours, JT Miller) and 3 that will be in hand at some point. 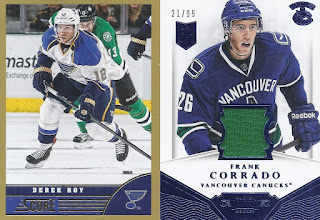 I can always throw in a few bonus RA cards, such as this pair of Kitchener Rangers alums. 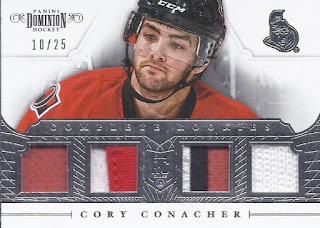 And I can also add a card from what might have been the only insert set I didn't pull a card from - Complete Rookies. L-R, theres a jersey relic, a seam, a patch and a fight strap piece.

There you have it! More from this shipment next post as I'll recap another pile of Jamal Murray additions.