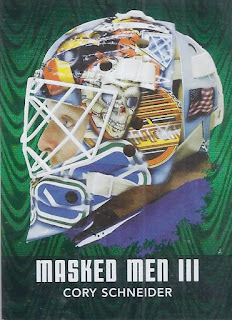 This is a pretty meta mask design for the binder. It is a mask with more masks on it. You can see Gary Bromley's, Kirk McLean and John Garrett's lids on there, along with Curt Ridley on the other side. 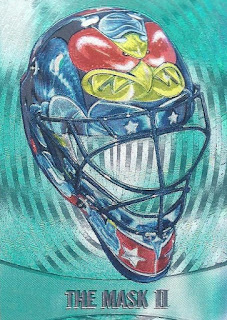 Marc Denis' Blue Jackets mask may not bring the history of Schneider's, but it is one of the more famous ones in the short history of the franchise. 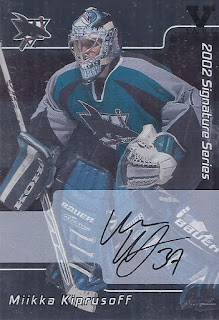 While I'd prefer an auto of Miikka as a Flame, I'll take this one just as gladly. 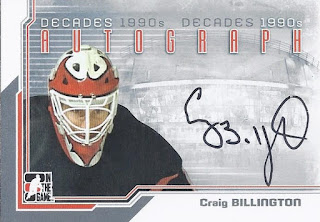 I guess this auto of...C311A?..could go in my Sens collection as well. Yegads that's a horrible signature. I see what he's going for with it, but I really don't want to play Pictionary while trying to interpret an auto. 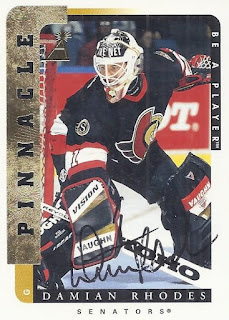 This could also go in either location. At least the signature looks like one that could conceivably belong to a guy named 'Damian Rhodes'. 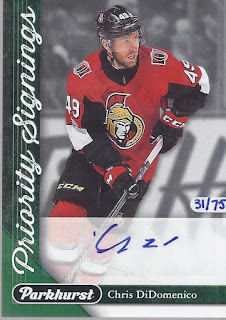 OK. So my Sens autograph acquisitions didn't have the best penmanship. This one seriously is a candidate for worst of all-time. To quote a line from Law & Order: "It looks like a breakdancing chicken wrote this". 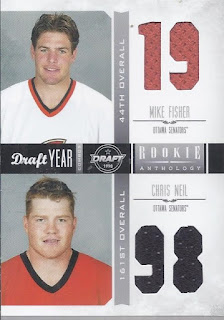 At least they can't screw up relics. 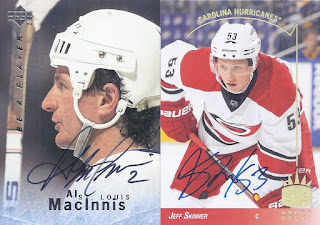 Now that's more like it for signatures. These two are bound for my Kitchener Rangers alumni collection, and feature beautiful, large signatures, including their jersey number. Even if they're initials only for Skinner, at least it still looks like he and Al both made an effort with theirs.

And that's another Expo in the books!
Posted by buckstorecards at 03:30