Another base heavy release, another case break with the Bills. 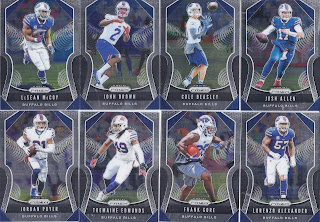 It is Prizm this time, and although these are training camp photos, the three players pictured in them are making their debut in my collection. This is probably the closest Brown and Beasley have gotten to actual Bills uniforms so far, but they have had photoshop and 'now with' cards so far. 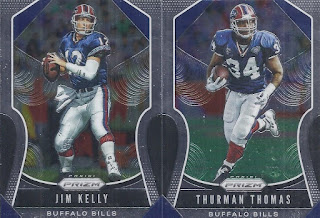 The Legends portion of the set gives me yet another chance to add a Jim Kelly card to the Bills collection, as well as a dupe for the 2/14 collection. 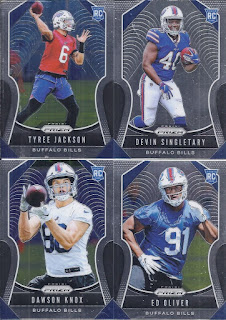 And your rookies. Tyree didn't make the team, but the others are still there.

As for coloured parallels, which are a Prizm staple, I struck out. Despite there being at least one per jumbo pack, numbered or not, not a single Bills card went my way. But, I did land some autographs. 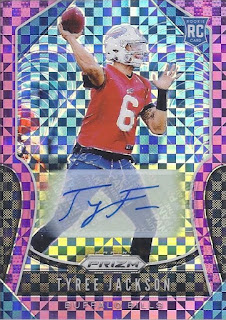 The lowest numbered (/49) of which was this Tyree. I guess they have to dump the stickers somewhere at this point, and this is as good as any unless Panini lands the XFL license. 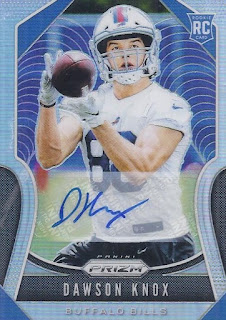 Dawson Knox, however, did make the team and is becoming one of the more popular Bills on the team this season. If he'd throw himself through a flaming table in the parking lot post-game, he'd move even further up the list. 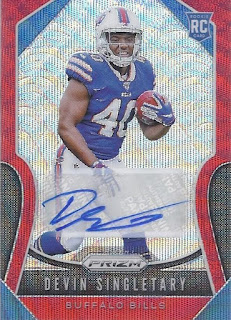 Devin Singletary had a few key runs in the game against Washington this past weekend, picking up his second touchdown of the season and over 100 total yards rushing/receiving as he returns from injury. Even with sharing the RB job with Frank Gore, he's looking the real deal.

There you have it!
Posted by buckstorecards at 03:57