I'm not sure how many PWEs are going to show up at buckstorecards HQ, given it took until mid-February for the first one to arrive. Still, I'm going to try to remember to group them all together. #1 this year is a PWE from fellow Bills & Mets fanMark, formerly of This Way to the Clubhouse. 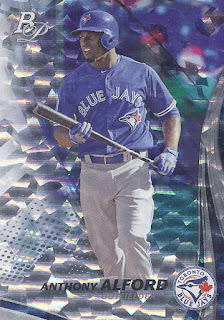 The first of the cards was neither Met nor Bill, but a card out of '17 Bowman Platinum. I don't think it ever made its way to Walmart shelves north of the border, so this is my first chance to see any of it. This rather loud card is the ice parallel. 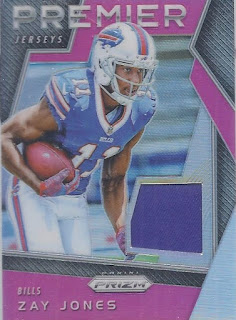 The other cards in the envelope were Bills, starting with this Zay Jones out of 2017 Prizm. It is a slightly-rarer pink parallel. 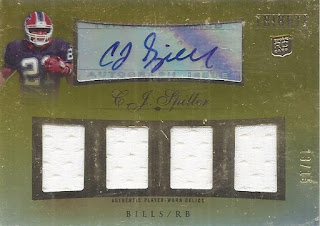 But this one is quite a bit rarer than the pink, limited to just 15 copies. CJ Spiller was part of the running back revolving door during the pre-Lesean McCoy years, and has bounced off-and-on the Chiefs roster last season. The sticker autograph is embedded in the card, and based on some legible letters, is one of the better bills autographs in recent year.

Thanks for these! I have some Mets/Bills from group breaks that will be heading your way hopefully by the end of the month.
Posted by buckstorecards at 12:03