There were only 2 cards in the most recent envelope from Shane @ Shoebox Legends. But, I knew they would be nice ones after being promised a suitable return for sending a Pat Verbeek stick relic stateside. 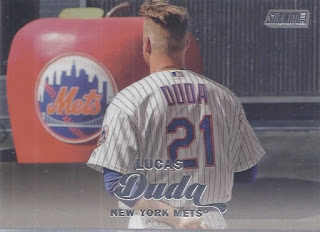 I knew this one was one the way, having mentioned my love for the picture chosen for this Stadium Club card. It just seems to be a perfect way to wrap up Duda's tenure with the team than with an iconic part of the Mets franchise alongside him. 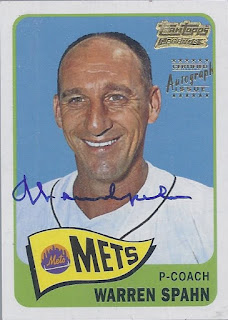 And card #2. Yes, that's a nice addition to the ol' Mets collection. An on-card autograph of a HOFer pictured (or at least listed) as a Met. Warren's time with the expansion-era Mets wasn't the most spectacular, but he was there long enough to get a card in the 1965 set, and thus get a reprint autograph in the 2001 Team Topps Legends release in that design.

I may even have this encased, it really feels like a special addition to my collection. Thanks so much for this!

Posted by buckstorecards at 09:02