I generally buy into the "a hit is a hit" philosophy of relic cards. If the card has a nice design, or it falls into one of my PCs, I'm not going to complain about the blandness of a swatch. But, sometimes it can be fun to get a relic that is somewhat unique to a team. In the past, I've hunted down a Nashville Predators swatch from one of their mustard uniforms. Now, three more from specific uniforms. 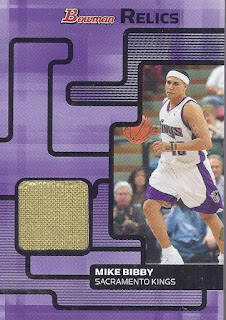 The gold uniform of the Sacramento Kings seems to make a lot of lists of the worst uniforms in NBA history. Which means that since it was the base colour for a uniform, and finding a relic with it couldn't be too hard or too expensive. And I got it for $1 at COMC. 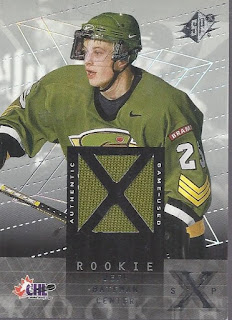 The (now North Bay) Brampton Battalion of the OHL might be the only franchise in sports to use military green. And I've got one. This one has been sitting in my COMC "to be posted" bin since Black Friday. 2014. Slacking! Jeff Bateman never did reach the NHL, but hockeydb lists him as playing for a team called the Lexington Man O'War. 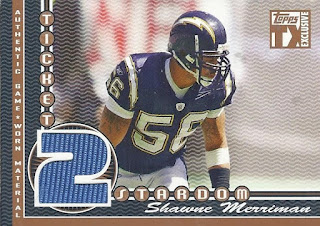 While the gold Kings unis do not get much love, the light blue Chargers variations do. So, I had to have one. This one of Shawne Merriman was the cheapest I could find, even though I have to ignore the cheesy '2' window as part of the 'Ticket 2 Stardom' subset.

And he did have a cup of coffee with the Bills, so that's a second reason to justify this purchase.

Posted by buckstorecards at 11:56