The best way for me to commence another year here is with some Dollarama repacks! 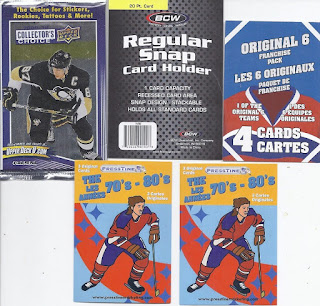 Such as this one! And this had 5 items as opposed to the the typical 4. 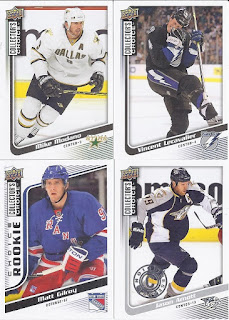 Alas, there was a cost to the bonus item, as the Collector's Choice pack only had 4 cards as opposed to the usual 6. Since that did include a couple big names, a rookie and a parallel, I'll just assume the pack wasn't searched and it was just an error. 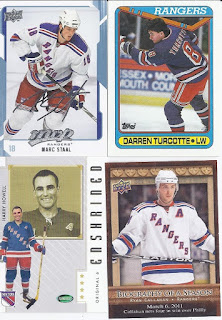 My Original 6 Pack team was the Rangers. And it was pretty much what I expected, except for that sweet Howell.

Pretty much what was expected from the 70s/80s pack as well, with a pair of 89s in each accompanied by a single card each from the early 80s. There's a new Dave Maloney for my Kitchener Rangers collection, even though it is not the most interesting photo imaginable. 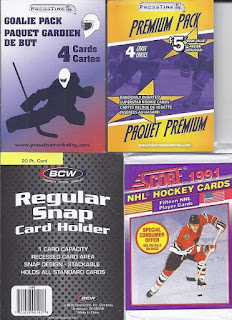 One more! There must have been someone offering a good deal on those snap card holders outside repack HQ. 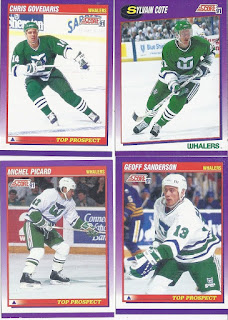 I can think of at least one person that would enjoy getting a quartet of Whalers from that Score pack. 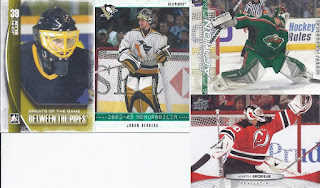 3 out of the 4 cards in the goalie pack were mask binder worthy. That's all I ask. I also like the stretching on the Fernandez and Brodeur photos, as well as the stretch to call Blue a Great of the Game. 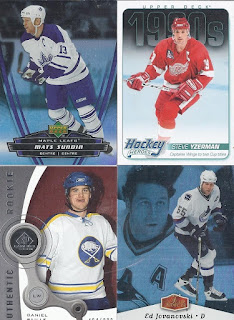 And the Premium pack. I'm not sure if this is the promised $5 in book value, but it did contain a couple shiny cards, an insert and a numbered rookie card. If you're going to (badly) photoshop a jersey onto Daniel Paille, you'd think they'd at least choose a less derpy photo.

But there you have it. Some nice repack keepers is a great way to open 2018.
Posted by buckstorecards at 08:59