I've actually had these cards, from a group break of Upper Deck Series 1, in my possession for over a week. But, with the Expo posts, as well as the fact I'd actually had those Bills cards for longer, means that I had to wait even longer to post these. I'm just glad incoming mail has quieted down. 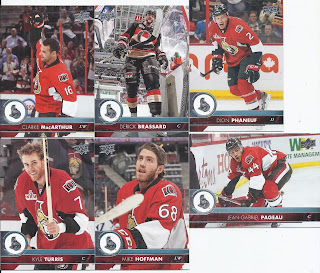 Here's the base set from S1. There seems to be a distinct lack of photos from game action this season. Only the Pageau appears to be from game time. But, you get the nice card of Mike Hoffman playing around with the puck in pre-game action. 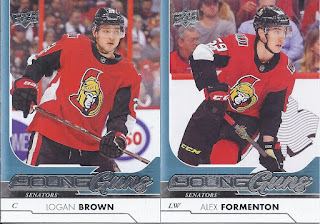 The Sens get two regular Young Guns cards in the set. Surprisingly, Colin White isn't in this portion of the set. Both of these guys have already returned to their Junior teams, so at least I can welcome these guys early to the team collection. 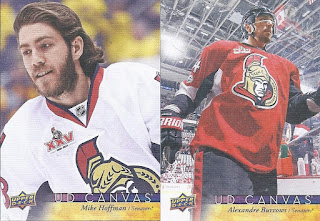 I got two of the three regular canvas cards, lacking only the Craig Anderson. I'll finish the set when the epacks start, and these start going for 30 cents on COMC. 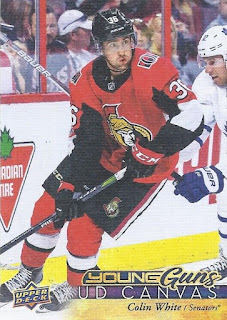 But I don't think one of these will be available for 30 cents. They fall at a rate of 1 every other box in the hobby. So, with 6 per case with a case break, and 30 in this portion of the set, I'm pretty lucky to land one of the two (Logan Brown is also in this set). 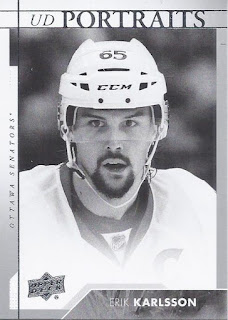 Portraits returns to the black & white design this year. Simple, but the B&W makes them look higher end than a flagship insert. 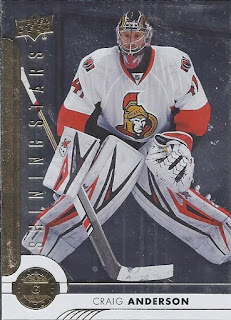 I missed Craig Anderson in the canvas, but I did land his Shining Stars insert. The goalies fall at a rate of one every other box as well, but it is a little easier to hit your preferred player, since this subset is only 10 cards. 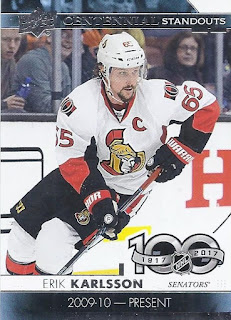 Here's one more Karlsson insert to end it, this one coming from a historic-themed Centennial Standouts set.

There you go! A little more S1 to come, as I doubt I'll build the set. But I did pick up a blaster to get a slight taste of it. That's on the way tomorrow!
Posted by buckstorecards at 08:41