The COMC challenges have been very good to me the past little while, and I was able to accumulate enough for another Blowout Cards $250 shopping spree. 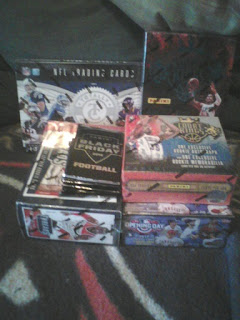 If you don't want to decipher the boxes in the photos, here's the list instead:

The single pack was picked up when I was just under $250 for the content, but at $250, you could save $10 on the order. So, it was like getting a free pack and a couple bucks more off the cost. 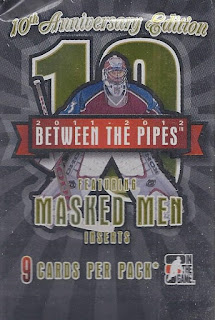 I'll go through this chronologically, starting with my weakness - cards for the mask binder from 2010-11.

One of those 9 was one of those puzzle piece/blocker cards that started showing up in ITG's later releases. Time for the actual cards.

The Future Stars portion really hasn't come true yet, at least in NHL terms. Sateri got to sit on the bench for San Jose, and earned some NHL cards that way, but he's over in the KHL now. Makarov did get into a game for Buffalo, but he's also in the KHL now. As for Anderson, he's bounced around between the AHL and ECHL in the Devils system. 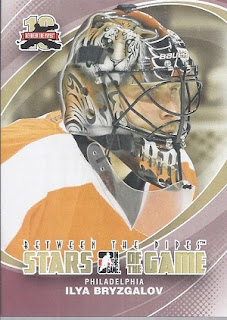 Now here's a mask card worthy of the binder, even though it is already in there. Ilya hasn't seen action since 14-15, but had a solid enough career.

The Decades portion is always fun in an ITG release, giving a nice trip through time to various designs on masks. The big winner here is obviously the stitches mask from Cheevers. 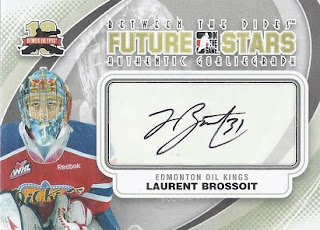 An autograph is the perfect way to end a pack. Laurent has also been back and forth, but, unlike Anderson, between the NHL and AHL. He even saw some action in the playoffs when Cam Talbot get shelled in Game 4. These is a sticker auto, but ITG did such a great job with stickers that you don't notice that it is.

And that's the pack! I'll start with the Totally Cert. football next time.

Posted by buckstorecards at 07:14