Which one will be the best (at least for me) of the lot?

Starting with the one with 2 visible cards. 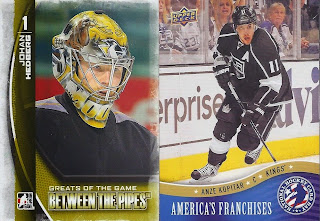 We've got a card from the US version of Hockey Card Day, which can be tough to find on this side of the border (notwithstanding a bubble envelope from Illinois that showed up earlier today), and a great card of the moose mask of Johan Hedberg for that collection.

But, the rest of the pack was pretty bland. Most of the pack was early 90s Score and Pro Set. Here are the highlights from the rest. A McDonald's card. And the only other cards other than the visible ones that weren't part of the Pro Set/Score era. 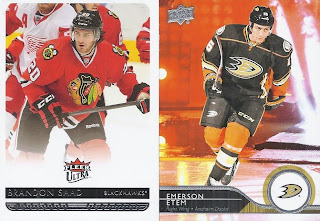 The one visible needed card repack? This one with the Emerson Etem I need for the UD base set. On the other side, an Ultra of Brandon Saad, probably the dullest of the base sets this year. 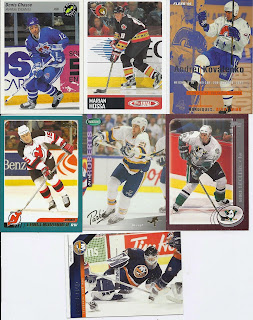 As for the rest here? While there was the expected stuff, it was far more interesting than the first pack. The Chasse might fall under the junk wax umbrella, but it gives you a nice pic of the Citadels logo. Then there's a Sens card, and a not entirely hideous 1994-95 Fleer card. Probably because the Nordiques colours are understated enough to work with the design. On the second row, some more cards from the 00's, with a Gold Parkie parallel in the middle. And finally, a non-Red Wings card of Chris Osgood. I know he spent a few season with other teams, but seeing him in Isles or Blues gear seems off to me.

And here's the last pack. The visible cards: 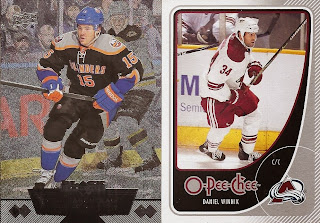 As I said, nothing PC related here. What were the hidden cards like?

It is a Hartford Whalers hot repack! 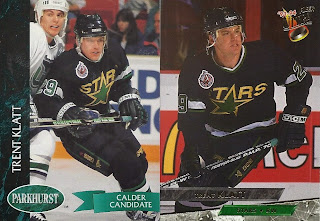 And to continue, it is a Trent Klatt hot repack!

But, there were a couple interesting finds. 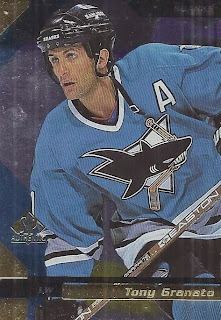 I think this is my first card from this set from any source.

And the big find came from this repack: 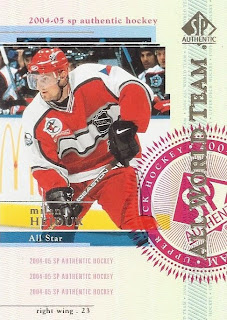 So, the big card for me came from the pack I would have been likely to avoid if I had only been guided by the visible cards. Such is the life of a repack fan.
Posted by buckstorecards at 12:21