And now, time to show off the Bills that showed up as part of the most recent shipment from COMC. There were also set builders in this bunch that are already in the appropriate box/binder that I won't bore you with. You've seen one EJ Manuel Prime retail parallel, you've seen 'em all. 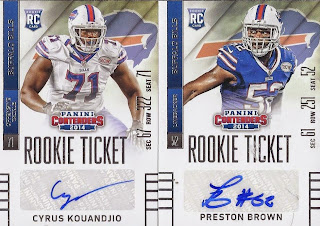 Let's open with a pair of autographs. While these aren't the most spectacular penmanship examples, these complete the foursome of rookies that had hits. While I haven't added a Sammy Watkins auto yet, a relic will suffice until prices reach a saner level. But, these two will join Cyril Richardson and finish off the year. Their 2015 draft wasn't that sexy in terms of likely rookie cards, but I guess Karlos Williams (5th round) will be my chase player of the season based on a couple early releases. Nick O'Leary (6th), Dezmin Lewis (7th) and Ronald Darby (2nd round, but a defensive player) also show up. 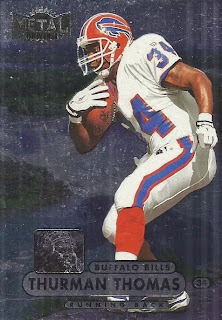 And what better way to follow up my look ahead to 2015 releases than with a flashback to 1998 with Thurman Thomas with Niagara Falls in the background. 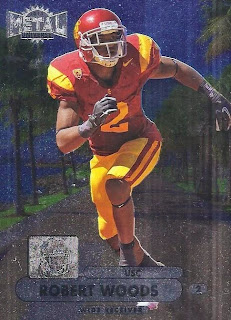 And the more recent salute to that Metal set with a Southern California landscape. At least that since the Bills seem to be off the "move to L.A." plans for the time being, this card won't be prophetic.

And those are the 4 new Bills for the binder.
Posted by buckstorecards at 17:40