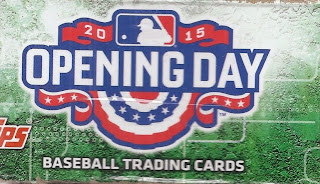 Sometimes you just want to bust a cheap box of cards. There's something about getting 36 packs in said box nowadays. It just feels very 80s or early 90s. Even if they are only 7 card packs.

Even with the inserts that fell at a rate of 1 or 2 per pack, I was still able to put together the complete 200 card base set. That's always nice. Since I'm not too crazy about flagship this year, the highlight for me was guessing whether the card was one that was used in S1, or one that will show up in S2. Since I was certain this photo would be more than likely to make some appearances on blogs, I figured it would be a S2 card. Looks like it. This is my favourite photo from that category - a rare snow cone shot from an infielder. 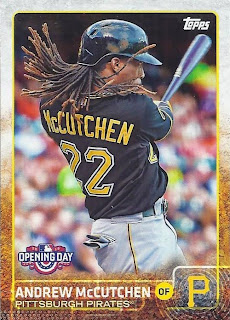 Honourable mention to this flying hair of a McCutchen card. And they could get away with using it on a Panini release as you'd only have to give a couple cents to the kid that's photoshopping out the logos.

But, the inserts are the big draw here. Let's dig into them. 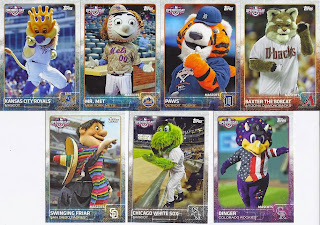 Mascots! And 7 of 'em! It is nice that some of them feature them out of their traditional gear. It looks like Mr. Met is awaiting a Jacob DeGrom start and that the Friar is celebrating some sort of Mexican Day at the park, with Dinger dressed for some more American holiday. But, most appropriate for this set is Paws. Ready for Opening Day. 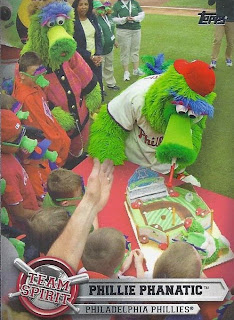 And the mascot love continues with the Team Spirit card. Looks like my first card of the Phanatic! I did have to google to find out that the other green figure in the background is the Phanatic's mother - Phoebe. 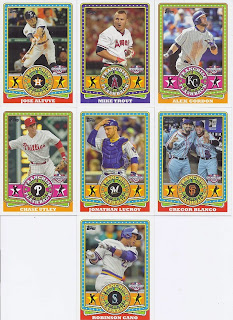 These were the 7 Flashback cards I pulled. You'd think they could could have found better photos for some of these, considering you can't see any of the logo on the Cano, and that the uniform front isn't really visible at all on the Lucroy or Altuve. At least the card backs include information about the uniforms or logo. 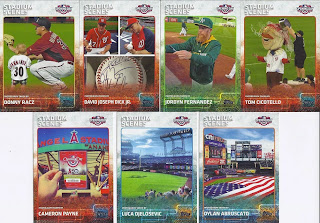 Unlike these, which seem only to promote Topps' social media presence. By this time next year, will anybody know why Roosevelt is getting an ice bucket over the head? 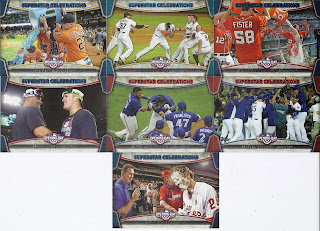 Speaking of over the head, that was a theme that continued in the Superstar Celebrations subset. 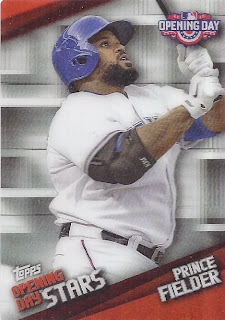 After pulling a Ryan Braun 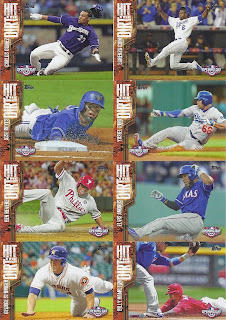 And Opening Day's version of Sliding Stars close out the insert portion of this post. While this could turn repetitive fast, at least there's a nice variety of slide stages in these, starting from the preparation on Cain to the aftermath for Reyes. 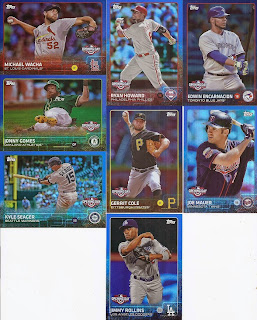 And finally, the blue parallels. Not numbered, but still nice and shiny.

I can't complain about any box where you pull a complete base set from it, so I'll call this a good box.

Any of the non-mascot/Mets/Jays/Roosevelt inserts seen here can be considered trade bait, at least when I get my GQ wantlist ready, likely sometime during the week once I've shown off the contents from the box tomorrow. Lots of trade bait there as well among the inserts.
Posted by buckstorecards at 12:58