I suppose I could return to the Zellers blasters. Or finally get around to the cards I picked up at the December show. But hey, why not show that you can bust cheap $2 boxes and still have some nice cards come out. 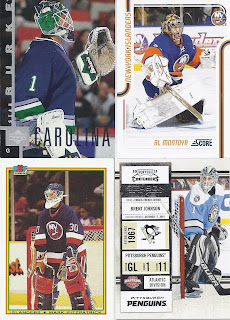 Opening up with a 4 card goalie repack. Yet another Mark Fitzpatrick Bowman comes my way. I'll soon be able to wallpaper a small room with them. I've already got the Montoya in my mask binder, so that one will be put aside in a pack set to go to a certain Wolverines alumni fan in mid-January. The other two will make their way to the binder as well. I've got a surprising # of Sean Burke cards in it. 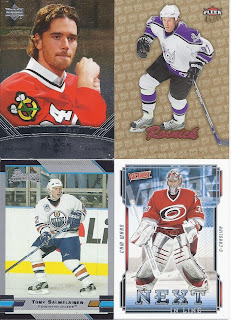 A supposed premium pack with $5 value. I'm not really going to look it up, but all are on their way into binders. Cam Ward, of course, is in the mask binder. A somewhat obscure rookie, a parallel of a potential Hall of Famer, and a new team card without a photoshopped jersey are all going in the misc. hockey binder. 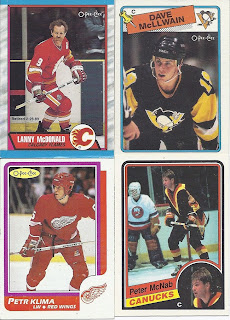 A pack of 4 80s cards. The Klima is a rookie card. The Lanny card will be a nice addition to my slowly-developing collection of his cards. It is also nice to find a Flying V jersey as well.

The final pack was a 5 pack with a guaranteed Hall of Famer. Usually that means a standard early 90s card. What was it this time? 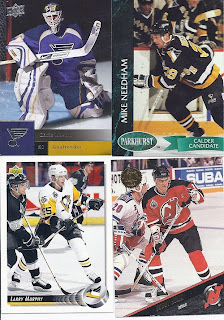 I originally thought that the Larry Murphy card would be the Hall of famer. It fit the criteria for this type of repack. But, nope. There was a 5th card in the pack, and it really was unexpected. 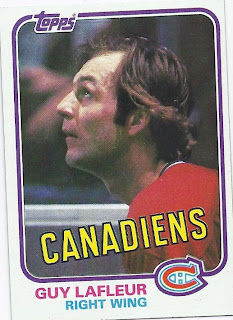 A 30-year old Guy LaFleur card, A sweet find, even though it looks like the photo was taken when Guy was in the penalty box. It may not be a super valuable card, but I still liked it enough that I'll put it in a hard toploader.

I definitely got my $2 worth of surprise from that box.

Posted by buckstorecards at 13:45