Back to Chronicles - Packs 1 through 3 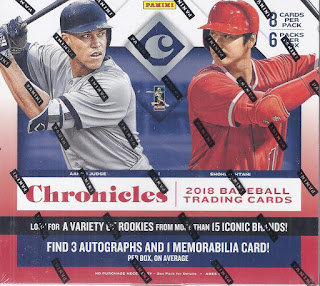 I can't get enough of this product. Let's bust another box! There's no 1/1 this time, but there's still enough nice stuff in this for a couple posts. 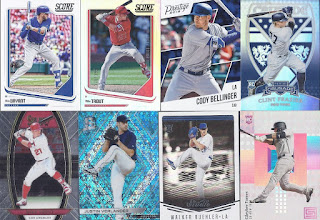 That's a nice start, with a pair of numbered card and a pair of Mike Trouts. I've busted 3 boxes of this, and this is the second one to contain a numbered Spectra card of Verlander. The neon blue version is /99, joining a neon pink /75. 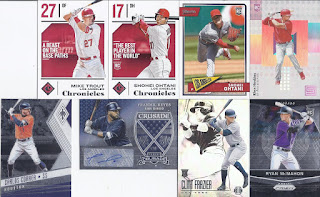 Parse that autograph. I dare you. Nice effort, dude. Really nice effort. On the other hand, there's also a couple Ohtani cards in this. That "The best player in the world" quote is attributed on the back to Logan Morrison, a nice little quirk to a base set that does have sort of a newspaper theme to it. This is a rare Chronicles pack that didn't have any numbered cards in it. 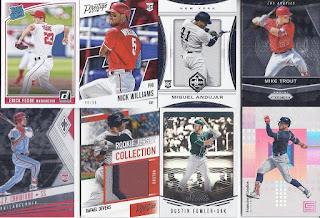 The auto might not have been any good, from a penmanship perspective, but at least the one-per-box relic featured a really nice patch. I didn't notice it until I turned the card over, but the Donruss (and Optic) inserts do function as Updates to those sets. The similarities to Rookie Anthology continue!

And there's three packs! Three more tomorrow, and two more autographs! Until then...

Posted by buckstorecards at 11:38