That Wasn't Part of the Deal!

So, I made a 50/50 trade with the Collector. I dropped by a little too late to get the Mets option or the Blue Jays option. So, I opted for a general basketball option. I figured that it would be most similar to busting a repack.

But there wasn't just basketball (which I'll get to later), as there were three groups of cards in there for some of my PCs.

Let's start with my Kitchener Rangers alumni collection. I really like the ITG card of Andre Benoit, since that has to be my first Hamilton Bulldogs card in the binder. 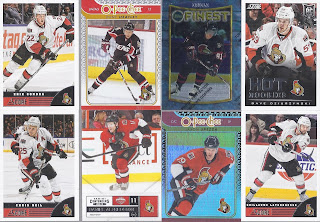 Andre Benoit can also be found in my Ottawa Senators collection, as can these folks. I busted a lot of 2013 Score, but can't remember if these are in my Sens collection. I know that rainbow foil of Spezza is new. Plus, you have the only occurrence of Alexandre Daigle and Finest in the same environment. 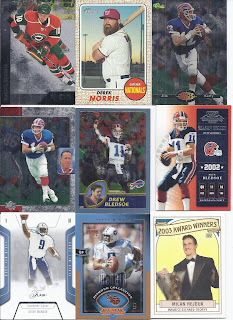 And how about a bunch of 2/14 cards to wrap things up. I was really surprised that I didn't have that Gaborik base card from Black Diamond. It just seems like one I would have picked out from a dime bin ages ago. The top 3 members (numbers wise) of the football portion all get two new cards each (Kelly 74, McNair 68 and Bledsoe 59).

Thanks for the bonus cards! I hope you enjoyed the cards I sent your way!
Posted by buckstorecards at 15:51