More hits as I start the second half of packs. 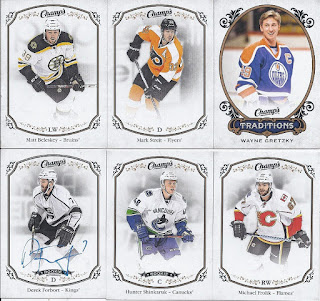 And the second half opens up with the autograph that the box promises. While the penmanship is awful, it still looks nice with an on-card autograph. And Forbort is my favourite name to say out loud of the 2015-16 rookie class. Try it! As for the rest, you can't go wrong with a Gretzky appearance. These Traditions inserts fall 1:33, and this one salutes his post warm-up drink ritual of diet pop, ice water, sport drink and another diet pop. 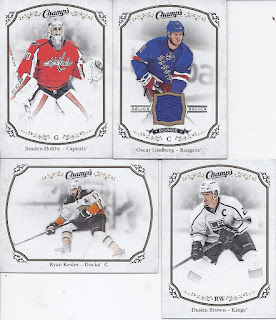 Well, there's a surprise. A third relic hit from a box that promised two. This also had a SP with the Holtby. I think Lindberg is the rookie I seem to be a magnet for cards from this year. 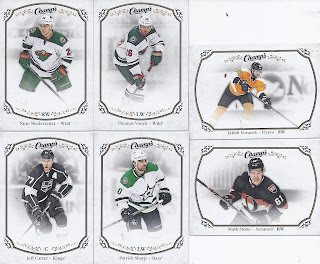 The only all-base pack of this group of packs lands me a Sens card. The SP in this was the Voracek. 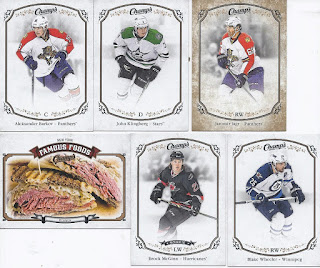 Hey, there's my Famous Foods card. I was so hoping for the poutine card. Or Montreal Smoked Meat. For some reason, the poutine card is associated with Ottawa as opposed to Montreal, but I guess they couldn't give two foods to the same city, and it was a lot easier to transfer the one without the actual city name in it than one with. As for the hockey portion, the Jagr is a gold back parallel. The rest were all standard base cards. 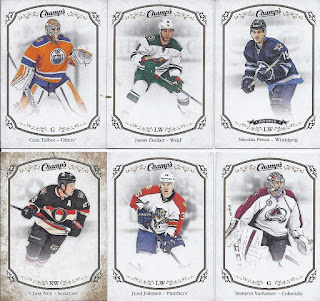 It is back-to-back packs with gold back parallels, as the Neil also falls into that parallel set. And it is a Sens card! Bonus! The Petan SP is the other card of note here.

So, that should be it for the hits, but I still have some fish cards to show off from the final 5.
Posted by buckstorecards at 13:32