A second group break post this week, this one showing off some Senators from a team select case break of 2015-16 SP Authentic. 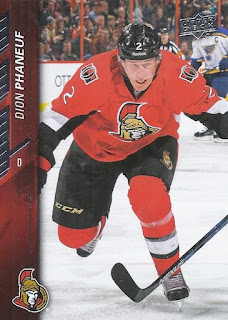 Starting off with the final cards from this year's flagship release, which were inserts in this set, Dion Phaneuf's first Senators card. 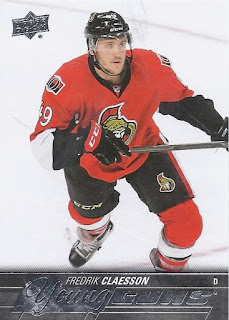 And the solo card debut for Fredrik Claesson, although he did have a shared card out of Fleer Showcase. 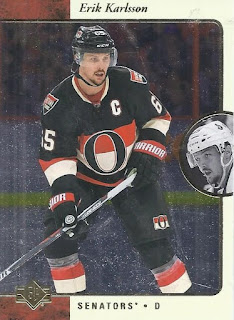 Erik Karlsson makes his first appearance in this 1995-96 retro insert. 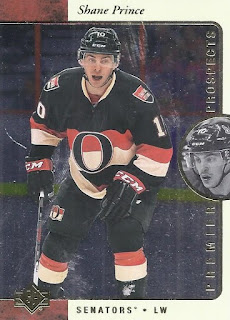 Also making an appearance in that group is this card of the now-an-Islander Shane Prince. I suppose I should be upset at seeing him still as a Sen, but he still counts as a Kitchener Rangers alum as well. 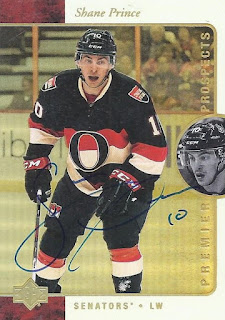 And if he was now an Islander in this set, I wouldn't have landed this nice gold parallel autograph of his. A couple of years back these were /99, but they aren't numbered this year. They do fall at a rate of 1 or 2 per case this year, so the print run might not be too far beyond that. 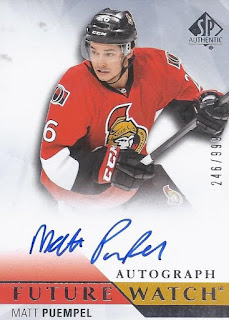 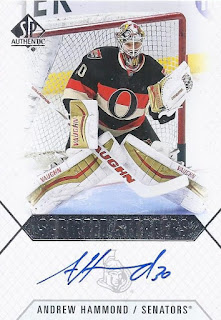 And a non-rookie auto! While Hammond returned to earth this past season, I still was wanting to add an auto of his based on his insane run in 14-15. Even nicer that it is an on-card autograph, and while I'm not overly enamored with his penmanship, it actually works here because it works with the team logo on the design. 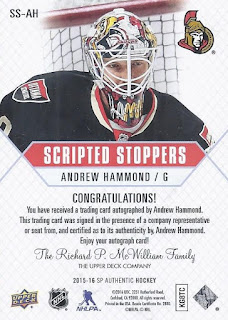 Heck, even the back has a zoomed in photo that shows how he continued to show his Hamburglar theme, as well as having the arches replace the middle letter in his less copyright-infringing nickname of Hammy.

And there you have my latest Sens acquisitions.
Posted by buckstorecards at 06:33